The preparations may start after the April 20 meeting.

Bratislava-based carmaker Volkswagen Slovakia may face a strike as the representatives of their employees, the Modern Trade Unions (MOV), dislike the course and the results of negotiations with the firm’s management.

“It is striking that the management of Volkswagen Slovakia acts with absolute misunderstanding of the current situation in the company and the state of working and salary conditions of its employees in the collective negotiations,” the MOV wrote on social network, as quoted by the TASR newswire.

The conditions presented by the trade unions fully reflect the carmaker’s economic results as well as the development in Slovakia’s labour market and economy, they add.

Except for increasing the tariff salaries by 16 percent, the MOV is asking for the merger of the holiday bonus with the Christmas one. They also propose to increase the budget for personal evaluation, the wage surcharge for working shifts and the basic length of holiday, as well as prolonged paid breaks, TASR reported. 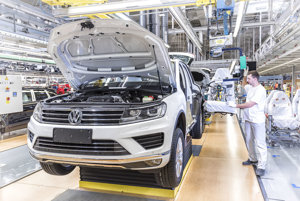 The MOV claimed that if the negotiations, scheduled for April 20, do not move in the direction of conditions advantageous for employees, they are ready to halt the talks. The trade unions will subsequently ask the Labour Ministry to appoint a mediator and will start preparations for a general strike.

The carmaker’s management has not commented on the strike threat.

“We are asking for understanding of the fact that we don’t comment on ongoing negotiations,” said Volkswagen Slovakia’s spokesperson, Lucia Kovarovič Makayová, as quoted by TASR.

The collective negotiations on working and salary conditions in Volkswagen Slovakia were restored on March 29, after a two-month break.

The MOV currently represents more than half of the total of 12,300 employees at the carmaker, TASR reported.