About 5,000 marched against corruption

The secondary school students wanted to point to no solutions to big cases; they call for the dismissal of several representatives responsible for solving the corruption scandals. 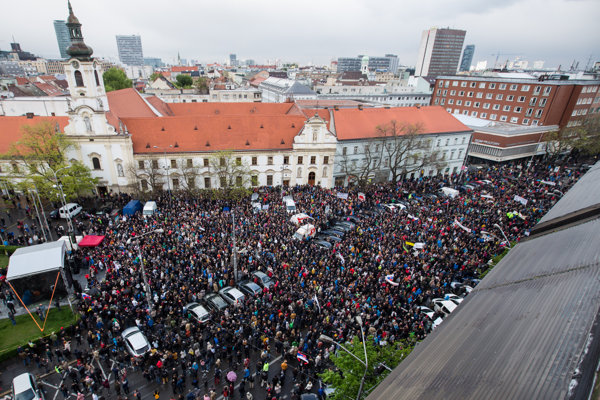 Thousands of people marched through the streets of Bratislava on April 18 to protest against corruption. They wanted to express their dissatisfaction that one serious corruption case follows another, without punishing the culprits, the Sme daily reported.

The protesters marched from the Hviezdoslavovo Square through Jesenského and Štúrova streets to SNP Square where the main part of the programme took place.

The organisers and the police estimate that some 5,000 people attended the event.

The protest march was organised mostly by two 18-year-old secondary school students, Karolína Farská and Dávid Straka, who say they are tired of watching how money is lost in corruption scandals and politicians do not listen to the voice of the public. The consequences of corruption have to be born by ordinary people.

“We are frustrated with the situation in Slovakia,” Straka said, as quoted by Sme. “This march is devoted mostly to the fight against corruption. We as students want to stay in the country but what is happening here discourages many of us. The country cannot flourish due to corruption.”

The organisers also delivered a memorandum to the government, asking for investigation of corruption scandals like Bašternák or Gorilla, and also to dismiss Interior Minister Robert Kaliňák (Smer) and Police Corps President Tibor Gašpar from their posts. They also call for the removal of Special Prosecutor Dušan Kováčik and continued investigation and court proceedings concerning all amnesties granted by ex-prime minister Vladimír Mečiar, Sme reported.

“I’m afraid of that no, which is the saddest thing about this,” said actor Maroš Kramár, who played in the Únos (Kidnapping) film about the abduction of son of the former Slovak president Michal Kováč, as quoted by Sme.

Another person to make a speech during the march was Zuzana Hlávková, former employee of the Foreign Affairs Ministry, who pointed to murky practices concerning the competitions on cultural events linked to Slovakia’s EU Council Presidency.

“I have learned that my voice, though it is sometimes shaking, is strong and important,” Hlávková added, as quoted by Sme. 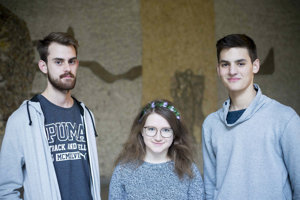 Also Anna Remiášová, mother of Róbert Remiáš who was killed in 1996, spoke before the participants, saying she would do everything to support young people.

“I have a message for you that I have born in my heart for 20 years: don’t allow anybody to touch your right for life,” Remiášová said, as quoted by Sme. “We lose a happy family life because the young leave and families are separated.”

The whole march was also supervised by the police, though no serious incidents happened. They were expecting some problems mostly because of the planned meeting of the far-right extremists held in front of the Judicial Palace to commemorate the anniversary of the death of wartime Nazi-allied Slovak state president, Jozef Tiso, Sme reported.