Slovak diplomat – who was once “shadow” foreign minister of the Smer party – will become an official of a UN economic body. 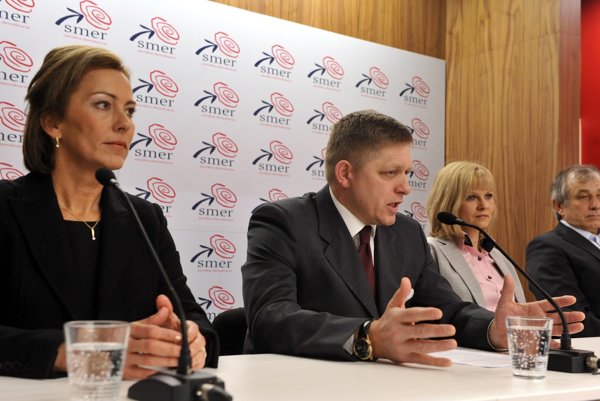 Oľga Algayerová (L) was the foreign minister of the "shadow cabinet" presented in 2011 by the chairman of (then opposition) Smer party, Robert Fico (2L). (Source: TASR)
Font size:A-|A+

Slovakia's Permanent Representative to the International Organisations in Vienna, Oľga Algayerová, has been appointed to the post of executive secretary of the Geneva-based United Nations Economic Commission for Europe (ECE).

She was appointed to the post by United Nations Secretary, General Antonio Guterres, the Slovak Foreign Ministry informed the TASR newswire on April 18.

“I'm immensely pleased that in addition to its good personnel representation in EU structures, both in terms of number and quality, Slovakia also has personalities who are successful in international organisations, such as those falling within the UN,” Foreign Minister Miroslav Lajčák said. “This shows the quality and maturity of Slovak diplomacy which is recognised abroad and I'm proud that a Slovak citizen has been appointed to this senior post for the third time now.”

The appointment is recognition of Algayerová's leadership and diplomatic skills, her profound knowledge of matters that are relevant to her new role and her ability to build partnerships involving key people and the UN, said the ministry, as cited by TASR.

The ministry also stressed Algayerová's career of over 20 years in foreign trade. She was the ministry's state secretary between 2006 and 2010.