Some previously blocked pages have been restored but many remain unavailable.

Facebook blocked the official site of Marian Kotleba, chair of the far-right People’s Party – Our Slovakia (ĽSNS), which had nearly 80,000 fans. It was the second biggest pro-Kotleba fanpage on the social network, after the official site of the party, the Denník N daily reported.

It was not the first site related to the extremists that has been blocked recently. Some of them, however, have been restored. This includes the profile of blogger Mário Vidák with some 15,000 fans and a site entitled “I vote for Kotleba, I vote rightly” with 45,000 fans.

On the other hand, the profile of ĽSNS MP Milan Mazurek and the main page of the ĽSNS remains blocked. Also the profile of ĽSNS deputy chair, MP and potential candidate for the seat of Nitra’s regional governor, Milan Uhrík, with about 14,000 fans, remains unavailable, Denník N wrote. 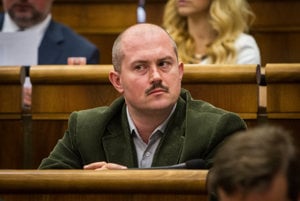 The daily mapped the network of more than 140 sites supporting the ĽSNS in February 2017. Seven of them were unavailable by the end of the month, probably because they were cancelled by their administrators or merged with other sites.