Gradually 55 bilingual signs will be installed by the end of September. 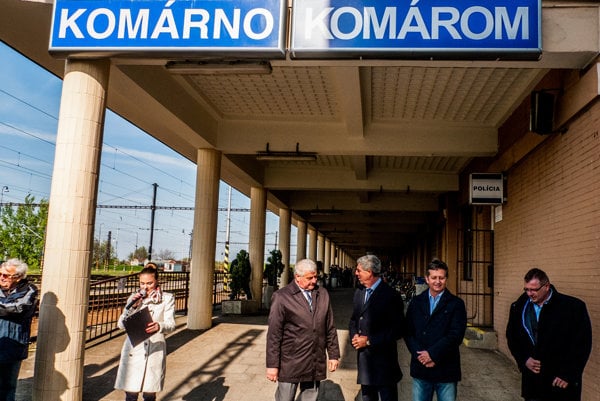 Passengers at railway stations in Dunajská Streda and Komárno, both in southern Slovakia, will be able to read the name of the station not only in the Slovak language but also in the minority Hungarian language. Transport and Construction Minister Árpád Érsek and deputy speaker of parliament Béla Bugár (both Most-Híd) officially unveiled the bilingual signs in the towns on April 21. Thus the station in Dunajská Streda bears also the name Dunaszerdahely and the station in Komárno also Komárom.

In line with a government regulation, as many as 55 bilingual boards - 54 in Hungarian and one in the Rusyn language - will be placed at stations located in Slovak towns and cities with considerable non-Slovak populations. All the signs will be installed by the end of September.

“I believe that bilingual boards will help passengers to orient themselves better, and at the same time they will be a positive impulse for mutual coexistence between people of mixed nationalities in towns and villages,” said Érsek as cited by the TASR newswire.

Supporting national minorities has been among the priorities of the Most-Híd party and the government manifesto, i.e. its plan for its four-year term.

“The current government is aware of the fact that national minorities are enriching the state with their own languages, culture and history,” said Bugár, adding that such measures do not deprive people of the majority nation of their rights in any way. At the same time they show national minorities living in Slovakia that they are not being neglected.

The bilingual boards will be set up only at railway stations in towns where at least 20 percent of the population belongs to a national minority.