The most famous circus comes to town

The famous Cirque du Soleil is in Bratislava celebrating the 15th year of its show Varekai: Tales of the Forest. 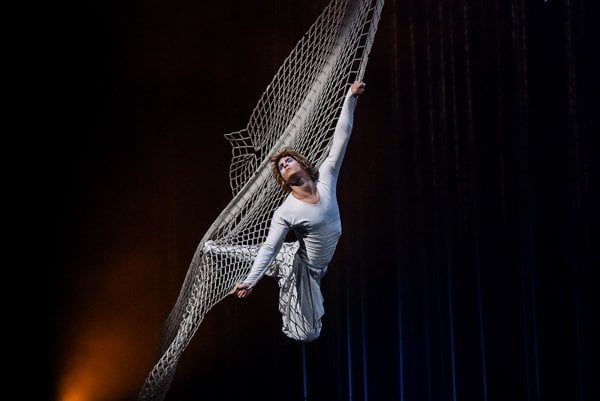 Cirque du Soleil is in Bratislava with its show Varekai: Tales of the Forest, the story of a unique world lying in a forest at the foot of a volcano. A lonely man descends from the sky to the forest shadow, to a magic world full of unknown creatures on the verge of reality and absurdity where miracles happen. Varekai is a word of Romanic origin meaning “anywhere”. The author and director of this piece is Dominic Champagne, who thus expresses a tribute to nomads as the founders of the ancient circus art.

The special circus, artistic Cirque du Soleil, offers a fusion of gymnastics, spectacular costumes, impressive story and live music – without ever using animals. It usually gives a performance only once in a city or town, and only returns to the country after a break of at least 18 months.

The famous circus usually surprises Slovakia with a novelty, but Varekai is celebrating its 15th birthday in Bratislava; its premiere was in Montreal in 2002. Since then, it has been presented in 13 venues of 23 countries, and a total of 10 million visitors have seen it. Recently, the ensemble gave their 5,000th performance. Varekai is accompanied by live band, whose drummer, Paul J. Bannerman, has been with the troupe since the very beginning of the show, i.e. for the fifteen years, and he has participated in all 5,000 performances.

Cirque du Soleil has developed gradually, starting in 1984 as a group of 20 street artists into a huge organisation residing in Quebec and including almost 4,000 emplyoees, including 1,300-plus artists from more than 50 countries worldwide.

Varekai will be presented in the Slovak capital seven times between April 27 and 30, with performances in the afternoons and evenings.

A video shows how the stage for Varekai was built.