Bratislava Council votes down land lease for US Embassy, again

Some want to send a clear message that the controversial fence is not welcome, others think the city coffers could have benefited. 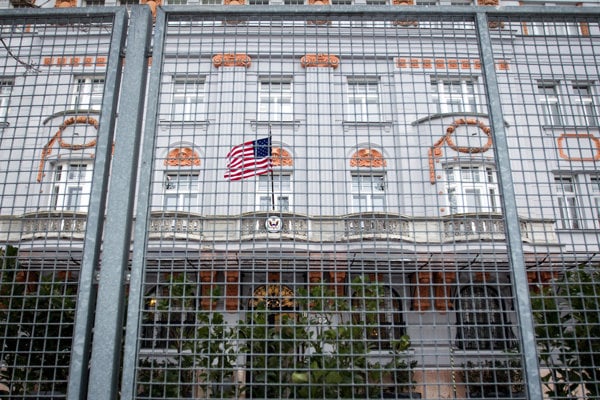 The US Embassy is often criticised for its fence. (Source: SME)
Font size:A-|A+

In a protracted dispute, Bratislava city councillors again did not approve the lease of plots on Hviezdoslavovo Square in downtown Bratislava around which the security fence surrounding the building of the US Embassy stands.

Despite this decision, it is not very probable the fence will be removed quickly as, according to the Vienna Declaration, adjacent plots belong to the security zone of the embassy, regardless of the ownership.

Bratislava councillors refused the lease of approximately 1,300 square metres of city land outside the embassy building by their vote on April 26.

“We clearly showed the Americans we are against the fence on our nicest square in Bratislava,” councillor Martin Borguľa said after the vote, as cited by the Pravda daily. Borguľa, who believes that the embassy's security could be ensured even in the absence of a fence, has called for a meeting with the US Embassy with the aim of finding a compromise.

On the other hand, deputy mayor of Bratislava, Iveta Plšeková, weighed in by saying that the council was supposed to decide on a land lease, not the fence as such. “A decision concerning the fence should be made by the Old Town [borough] Construction Office ... What we were supposed to do was to decide on leasing the land on which the US Embassy is effectively operating,” she said, adding that the city could have received a lot of money for renting the plot under the fence.

History of the fence

The area has been used by the embassy since 2005 as a security zone and is enclosed by a security fence, steel posts, barrier flower containers and a retractable car barrier.

Councillors had already voted down the proposal on two other occasions – two months ago and in September 2016. City Hall was seeking to lease the land to the embassy until August 15, 2019 at a cost of €481,000 annually. The embassy had a two-year option on renewing the lease contract and was supposed to pay one euro per square metre per day. However, if the embassy could have produced a valid construction permit for a new building, this would have slashed the sum all the way down to 3 euro cents per square metre per day.

Under the Vienna Convention on Diplomatic Relations, a security zone is part of an embassy regardless of its ownership, the City Hall explained, as quoted by the TASR newswire. A land lease contract would provide a legal arrangement vis-á-vis the use of the security zone until the time that the embassy relocates. City coffers could have at least benefited from extra funding until that time, the City Hall added.

Meanwhile, the embassy told TASR in February that it has made progress in its plans to relocate from Hviezdoslav Square and that it has found a suitable site for this purpose. The new facility is supposed to meet all security requirements and to blend in with its surroundings.