Fico considers Belarus to be a bridge to Eurasian market

"We want to focus mainly on economic cooperation without intervening in the internal issues of our countries,” the Slovak PM said after meeting his Belarus counterpart. 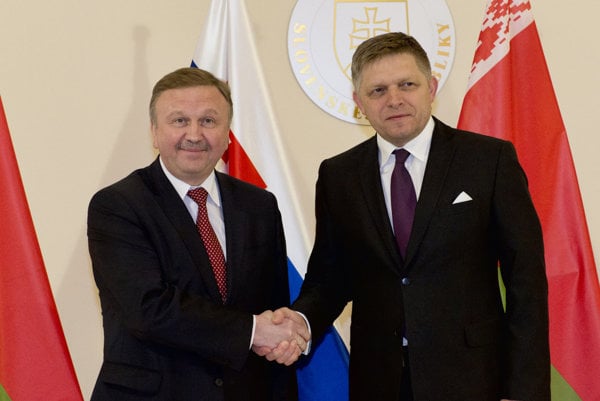 Belarus may be a fantastic bridge to the Eurasian market, while Slovakia may be a bridge for Belarus to Europe, is the opinion that emerged from the meeting of PM Robert Fico with Belarus PM Andrei Kobyakov, during his visit to Slovakia.

Slovakia is supporting the cancellation of sanctions against this country in favour of an Eastern partnership; mutual trade exchange to the value of €160 million is low, according to Fico, who added that Slovakia and Belarus are mentally, culturally and linguistically close. He described cooperation in the pharmaceutical field as excellent but noted that cooperation in the fields of nuclear energy and waste processing is also ongoing. A perspective on cooperation in agriculture, mainly in animal farming may also be taken.

“On Wednesday a memorandum concerning the defence industry was signed,” said Fico as quoted by the SITA newswire, adding that Slovak and Belarus companies (MSM and BelOMO) oriented towards this field have an interest in building a company in Slovakia concerned with optical machines.

“Neither Belarus or Slovakia are big countries that can influence global affairs. That’s why we want to focus mainly on economic cooperation without intervening in the internal issues of our two countries,” Fico said, as SITA informed.

Belarus could specifically benefit from Slovakia's membership of the EU, Eurozone and Schengen. Belarus, as part of the Eurasia zone between Minsk and Moscow where there are no customs or tax barriers, could pave the way for Slovakia into the Eurasian market, according to Fico. 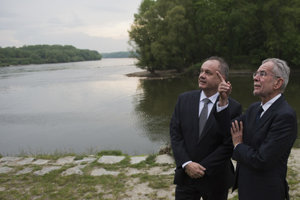 Read also: President: Slovakia wants to stay at the core of the EU Read more

Belarus considers Slovakia a strategic partner and is interested in cooperation, Kobyakov said. He pointed to the representation of Belarus in Agrokomplex in Nitra where they introduced agricultural products such as tractors.

He thinks that his country may also use the experience of the car industry. Kobyakov confirmed that the main fields of cooperation should be pharmaceutical, agricultural (mainly information about cattle breeding), energy and waste processing and he would be glad to add the chemical industry to the list.

Both PMs also signed a cooperation agreement in the field of science and technology. In addition, the Slovak office of standards, metrology and testing signed a memorandum concerning cooperation with the Belarus state committee for metrology.

Activists Alena Krempaská and Peter Weisenbacher from the Human rights institute protested with two of their colleagues in front of the Government Office where Fico met Kobyakov.

They asked Fico to talk not only about the economy with the Belarus PM but also about human rights and democracy in his country.

“More than month ago, the last dictator in Europe, Alexander Lukashenko, used violence to end protests against his regime. Citizens and activists protested against the non-social laws of the regime and they advocated gradual democratisation,” Krempaská said for SITA.

The police beat them and more than a hundred were arrested, she added, saying that this is the regime Slovakia will cooperate with.