Having a bachelor degree in Slovakia is still considered as an unfinished education. 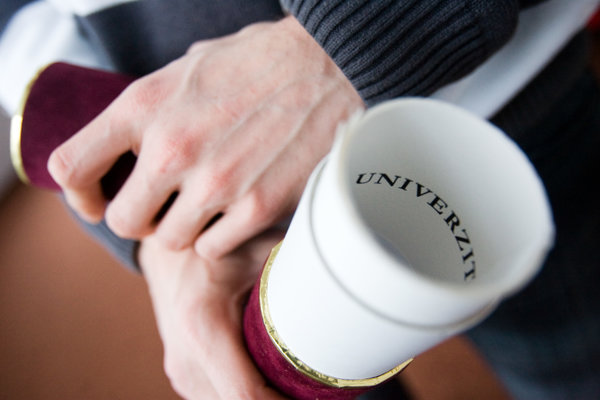 When young Slovaks decide to study at university, they almost never think about doing just the first degree, a bachelor degree, because in Slovakia it is not considered as finishing university.

“In our culture, the bachelor degree is not established enough. We were used to a university education lasting four or five years,” said Emil Višňovský, co-author of current school reform “Learning Slovakia” (Učiace sa Slovensko) for The Slovak Spectator. He added that bachelor degrees could be prolonged to take four years.

When a student thinks about continuing studies to the second degree of university education, master degree, he or she should decide what they want to become in their professional life, Višňovský advises.

“For an academic career, a second degree is necessary, even insufficient, and the third degree is also required. But when thinking about practice, in some fields a bachelor’s degree could be enough,” explained Višňovský, adding that it’s hard to specify in which fields it’s not necessary to continue onto the second degree.

Bachelors? No, thank you

Practice shows that encouraging a bachelor’s is not that easy. Stereotypical perception of a bachelor degree as an unfinished university education with an unclear professional profile still persists. Those choosing job candidates in companies or institutions are also influenced by the common perception. Such is the summary of the evaluation Employer Research from 2015, made by the Centre of Scientific-Technical Information of Slovakia, specifically the Department of Methodology and Creation of Information Education.

The research also found that of those employers who accepted university educated people in the last two years, the majority of graduates did not have only bachelor degrees. From 2,411 respondents, only 11 percent confirmed that they accepted a graduate with a bachelor degree.

Most of the graduates with bachelor degrees employed in last two years were in the field of banking, insurance industry and financial mediation (on average 2.79 employees), followed by the field of health care and social help (1.49 employees), hotels, restaurants, real-estate, rent and services (1.07).

The lowest chance to be employed as a bachelor degree graduate is in education (0.33) and warehouse organizers, the post office and telecommunication (0.35).

When talking about the size of a company, the biggest chance for a graduate of bachelor degree is in large companies (average 3.07 employees), followed by middle ones (0.88) and the lowest chance is in small companies (0.50 employees).

“Currently, we have 7,500 job vacancies suitable for graduates of first degree and 9,000 suitable for graduate of second degree,” informed PR manager of job vacancies database Profesia, Martin Menšík, adding that these numbers are not exact because many employers state all possible degrees of education in their ad. However, employers prefer a second level degree, agrees Menšík.

It started in Bologna

University education was divided into three degrees based on the Bologna Declaration, signed in 1999 by 29 education ministers. It emerged from a process to ensure comparability in standards and quality of higher-education qualifications not only in European Union countries, but also in Iceland, Norway, Switzerland, Turkey, Armenia and Ukraine. The unified educational system should make it easier to apply for a job in another country, because the employer will recognise the education level of the applicant.

The basic framework is three cycles of higher-education qualifications: the BA studies, the MA studies and PhD studies. In describing the cycles, the framework uses the European Credit Transfer and Accumulation System (ECTS), which are credits students get for each subject. The number of credits depends on how much time and effort a student puts into their studies.

In most cases, it takes three to four years to earn a bachelor's degree and another one or two years for a master's degree. One academic year corresponds to 60 ECTS credits, equivalent to 1,500–1,800 hours of study.

Learning Slovakia, the school reform which is currently at the preparation stage, also mentioned in several points the problem of underestimating the bachelor’s degree.

The Education Ministry wants to broaden professional oriented study programmes, mainly at the bachelor level of study. Universities should allows more flexibility in the content of their education and employers should be motivated to provide education in the work environment. At the same time, students should have enough information about the needs of the labour market and schools should be prepared to meet them.

The ministry also plans to create conditions for realizing the bachelor degree according to the liberal studies model. This model should ensure the possibility for students to specialize in the second half of their studies, with a thesis in their chosen field or the combination of two fields (choosing a major and minor).

Višňovský would like to see the combination of both.

“If we are successful with the reform, it will also help the employment rate of graduates with bachelor degrees,” summed up Višňovský.