He proposes to increase the minimum wage and surcharges for night and weekend work, ban social dumping and more. 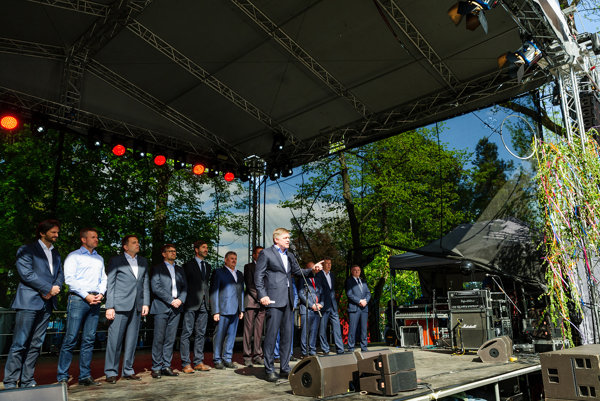 Slovakia is doing well economically and financially and this must translate into a rise in the living standards of the people. The government must do all it can to ensure that the standards of living in Slovakia draw closer to the EU’s rich countries. This was the main message Prime Minister Robert Fico conveyed with his speeches in Nitra and Žilina during the celebrations of May Day. He introduced several measures among which are an increase in the minimum wage, surcharges for night and weekend work and a ban on so-called social dumping, or hiring foreign workers for low wages.

“If an employer needs to import workers, the employees must work under the same conditions as Slovak workers,” said Fico as cited by the TASR newswire.

Thus foreign workers should be put on an equal footing with Slovak employees when it comes to working conditions and wages.

“Slovakia is currently facing an acute shortage of qualified labour, and employers are mounting pressure to import a cheap workforce,” said Fico when speaking at a Labour Day event organised by the Trade Union Confederation (KOZ) in Žilina. “We must prevent a scenario in which our workers are replaced by this cheap labour.”

The minimum wage should increase close to €500 next year and above €500 in 2019. Also a paid 10-day holiday for the fathers of newborn babies should be enacted. In addition, given that Slovakia is the EU country with the largest proportion of people working at night (240,000 people), the surcharges for night work should increase from the current 20 percent to 50 percent of the country’s minimum wage. Surcharges for work during weekends and on state holidays are to be upped to 100 percent of the minimum wage. Another measure to be introduced is the so-called pre-retirement, which will apply to people who become jobless or wish to retire shortly before reaching retirement age, or alternatively, those who do have a job but cannot work until 62 years of age.