A test with a tank

The first – and for a long time also the only solid – bridge in Bratislava appeared in 1890. It was opened with great pomp and splendor; in attendance was Kaiser Ferenc József himself who benignly agreed for the bridge to bear his name. 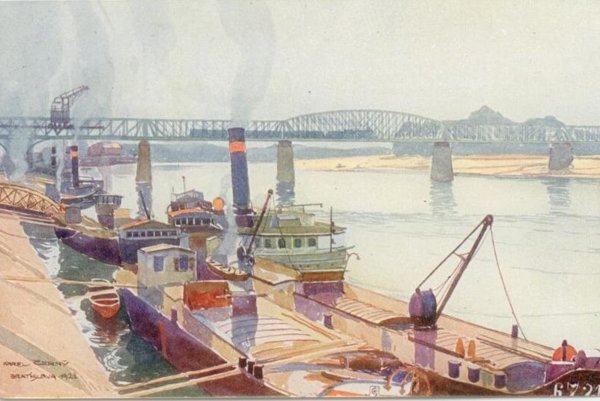 However, the demanding task of bridging the big Danube river was preceded by it being dammed and regulated in 1870; without this, it would not have been easy to build the bridge.

By the end of World War II, Bratislava was without a bridge again, however. The retreating German army arranged for the pride of the city to be demolished, thus slowing down the progress of the Soviet Red Army.

One army destroyed the bridge while another built it again very quickly, though. About 600 Soviet soldiers, together with 450 German prisoners of war, started re-building it. Thanks to the fast pace of work and the number of people involved, the river was bridged again in a record short period of time, 5 months and 17 days. The final approval, or a strength test of the bridge took place on August 6, 1945, still in war style – when a 50-tonne tank crossed it and the construction did not collapse, it was clear that the effort was successful.

The last bolt was ceremonially screwed tight by famous Soviet marshall Konev, and thus, the main point of the Soviet military mission in Bratislava was fulfilled. The new bridge of the Red Army, meant as a temporary solution, served the Slovak capital for more than half a century before it was torn down and recently replaced by a new one. It even came to be called The Old Bridge.

This bridge with the river and ships attracted the attention of Czech painter Karel Černý who painted it in 1921.