I am a foreigner and I typically eat...

How can you get to know other people when all you ask is if they married a Slovak and what do they eat (typical food) with maybe an eventual bonus question on alcohol? 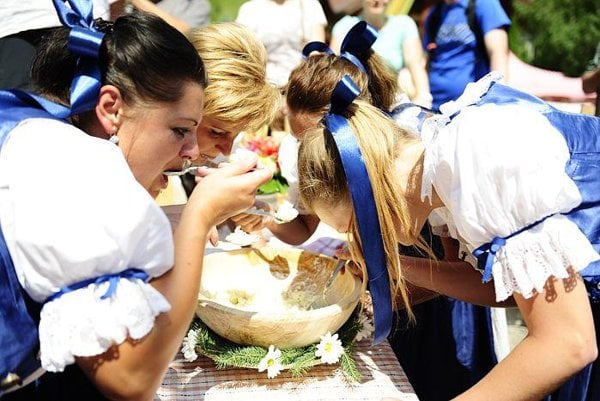 About a month ago in Kosice, Slovakia’s second largest city, I was listening to a high school history teacher explaining how her students discuss the Holocaust, visit concentration camps, read Anne Frank’s Diary as compulsory literature and are even asked to imagine how would they have behaved if they had lived back then (a rather futile exercise because in theory - in the “imagine that…” situation- we all tend to be bigger heroes than we really are and use facts that we could not have known “back then”).

She has been trying her best to encourage her students, among whom some sympathize with the far right party ĽSNS (hard to say how many, as not everybody was outspoken on this issue) to “think with their own minds”. Chatting with a few students at that school I came to realize that such a task is far more difficult than it seems. The students discussed the Holocaust and concentration camps during their classes but when asked about the most serious issues facing Slovakia today….well... forget about corruption, long term unemployment, the ageing population or the quality of schools ….”immigrants and Roma“ was the “correct” answer but they could not really say why. Some hinted at information found on the internet. I soon realized that I was the first immigrant they had ever seen and spoken to, in the flesh.

They are asked to imagine how it was “back then” at a time when their own grand-parents might not have been born but not how it is “right now in another place”.

Yes, given the relatively low number of foreigners living in Slovakia, locals lack direct experience with them and are easily influenced by “the internet” and political speeches but more history lessons in schools and trips to museums will not suddenly create generations of cosmopolite critical thinkers. History and Slovak literature textbooks are full of pieces about good natured Slovaks eating bryndza, playing the fujara, going to church and being oppressed (Hungarians and Czechs compete for the title of abuser-in-chief) during their entire history. With this mindset it’s easy for “opinion makers” whoever they may turn out to be, to replace “Prague” and “Budapest” with “Brussels” or “Berlin” when it suits them. How can you be open to others when you grow up hearing how you should not trust your own neighbours?

How can you get to know other people when all you ask them is if they married a Slovak and what do they eat (typical food) plus an eventual bonus question on alcohol? I am skeptical that food has any real impact in changing the attitude towards foreigners. Far-right sympathizers eat kebabs but this does not stop them from bragging about how they fight against “the Islamisation of Slovakia” for example.

I have become allergic to the topic of "traditional dishes". As part of the fjuzn festival a discussion on how some Slovak families have been helping asylum seekers in Slovakia was organized. I was really looking forward to it, unfortunately even before letting the audience know the story of the main characters – the presenter burned with desire to ask about….food. I stood up and left. This in fact illustrates the main issue that I have, both as a foreigner and as a journalist, with fjuzn and other similar events. Who are they for? Foreigners? Well, if they speak Slovak, because most of the events are in Slovak only and are usually boycotted by officials in charge of those institutions that should be more helpful to foreigners- let’s put it politely. These include the legendary Foreigner's Police, Labour and Education Ministries. Are these events for Slovaks? Then why are they in Bratislava and not in the regions of Slovakia which do not have foreign students, athletes or multinational companies? Where those sincerely touched by Anne Frank’s Diary go and vote for extremists and all sorts of experimental populists who promise to protect “us” against “the others”, whatever those “others” turn out to be….or eat.