Pay hikes will come out of our pockets, employers complain. 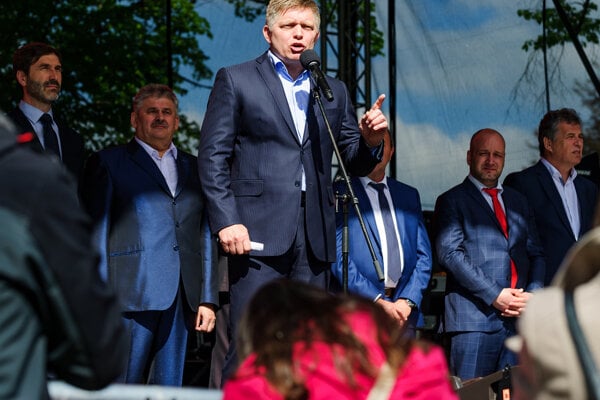 Slovakia is doing well economically and financially, and citizens must also feel this in the form of improved standards of living. This was the main message Prime Minister Robert Fico conveyed in speeches in Nitra and Žilina to mark Workers’ Day on May 1.

To achieve this aim, he set out plans to increase the minimum wage and supplementary payments for night, weekend and holiday work. He also wants to ban what has been dubbed “social dumping”, i.e. hiring foreign workers at low wages.

Employers responded that they would end up paying the bill for Fico’s proposed measures, while economic analysts warned that the proposed changes would mean the impact of any future economic crisis could be much more painful.

The minister for labour, social affairs and family, Ján Richter (Smer), has already been instructed to prepare an amendment to the Labour Code to put the proposed changes into effect.

“I think that these measures will be passed without any problems,” Fico said, as quoted by the SITA newswire.

Fico, who is also the leader of Smer, the largest party in the governing coalition, introduced this latest package of measures without any prior consultation with his coalition partners – the Slovak National Party (SNS) and Most-Híd.

Each of these parties has put forward its own proposals to ensure that Slovaks enjoy a share of the country’s growing prosperity.

The SNS proposes to make so-called 13th salaries (an annual bonus normally equivalent to one month’s salary) compulsory, while Most-Híd is tabling an alternative package of measures that focus on income tax cuts.

Fico proposes to speed up an already-planned increase in the monthly minimum wage. This currently stands at €435; the plan is to increase it to almost €500 next year and then to above €500 in 2019. The original plan was to have the minimum wage rise above €500 only in 2020.

Fico, noting that Slovakia has the largest proportion of people working night shifts in the EU (240,000 people in total), also proposes to increase the supplement for night work from 20 percent to 50 percent of the national minimum wage, i.e. from €0.50 per hour extra to €1.25 per hour. Such a surcharge would increase the annual remuneration of an average night worker by €500.

Another measure to be introduced is so-called pre-retirement, which would apply to people who become jobless or wish to retire shortly before they reach the normal retirement age.

Also, a paid 10-day holiday for fathers of newborn babies should be enacted. Fico also wants a bonus for moving for work to be reintroduced and made more attractive than in previous iterations.

Coalition partners have their own proposals

Most-Híd put forward its own two proposals just one day after Fico had launched his package. Unlike the prime minister, it proposes that the state rather than businesses should pay the bill.

The first measure would be to increase employees’ annual tax base exempt from income tax (i.e. tax-free allowance) from the current €3,803 to €4,650. While this measure would cost the state coffers €300 million annually, it would help every one of Slovakia’s 2.3 million workers, whether employed or self-employed, Most-Híd argues. The annual income of the average employee would increase by €160.

The second measure targets working pensioners. Most-Híd proposes that the monthly incomes of pensioners working under temporary employment agreements (known as ‘na dohodu’) paying up to €200 per month should be exempt from payroll taxes, as is already the case for students. This measure would cost the state €10 million per year.

Earlier in March, SNS leader Andrej Danko proposed that a 13th salary – which is normally paid in December, and is also referred to as a Christmas bonus – would be compulsory and could be exempt from income and payroll taxes.

On May 4th, the coalition partners met and agreed on the social package. All three party heads, Fico, Andrej Danko of SNS and Béla Bugár of Most-Híd share the same opinion that when the country thrives, it is their duty to present solutions that will increase people’s living standards, but only under strict fiscal discipline.

They will also meet during the second week in May with Finance Minister Peter Kažimír and Labour Minister Ján Richter (both Smer). Kažimír will bring a detailed analysis outlining the impacts of the proposed measures. Afterwards, they will assess the proposed measures from the viewpoint of feasibility and create one joint package of measures, said Fico.

Concrete legislative proposals should be submitted for the September parliamentary session for adoption, while most of the measures might become effective from the beginning of 2018.

Responses from the business sector

The business sector responded rather critically to the Fico’s May Day package.

Employers have long complained about how the minimum wage is set in Slovakia. Their main problem is that the level is set annually only via a political decision, and there is no formula by which a regular increase is calculated.

“We require an agreement upon a mechanism that will be predictable and will not mean an annual quarrel,” said Rastislav Machunka, vice-president of the Federation of Employers’ Unions (AZZZ), as quoted by the Hospodárske Noviny economic daily.

Peter Kremský, executive director of the Business Alliance of Slovakia (PAS), proposes to bind increases in the minimum wage to economic indicators like average wages, inflation and labour productivity.

“Political increases in the minimum wage have devastating consequences on economically weak regions,” Kremský told the Sme daily, adding that a high minimum wage may lead to the bankruptcy of small companies.

Kremský also accused the government of hypocrisy by tolerating employees in the public sector often receiving wages below the minimum, while at the same time pressuring private companies to pay higher minimum wages to their employees.

Higher pay for night, weekend and holiday work may cause major problems for companies at times of economic stress, warns Martin Hošták of the National Union of Employers (RÚZ).

“These may return to Slovakia after three or four years, and then it will be a big problem for employers,” Hošták told the Pravda daily.

On the other hand, trade unions support the increases.

“Even if the supplements curb weekend work, it would be only good for people because they will be finally able to rest more,” said Emil Machyna, head of the OZ KOVO trade union, as quoted by Pravda.

Businesses do not see any problem in banning social dumping, arguing that existing legislation already prevents this. They also insist that they hire foreign workers only because there is a lack of qualified labour in Slovakia.

The opposition is mostly critical of the proposed changes, while supporting the proposed paid 10-day leave for fathers of newborn babies, and the bonus for moving.

The Freedom and Solidarity (SaS) party says it does not have a problem with an increase in supplementary payments for night, weekend and holiday work, but says that these must be compensated for by improvements in the business environment. Its MPs point out that foreign investment, which has increased employment in Slovakia significantly, has arrived here due to the country’s relatively low wage costs and highly qualified labour. The proposed changes would worsen these favourable indicators.

“Thus, when increasing the social standards of employees, it is absolutely necessary to adopt measures to improve the business environment,” said members of parliament for SaS, as quoted by TASR, adding that otherwise Slovakia will not be competitive, and that during crisis periods this would have devastating consequences for employment and people’s standards of living.