Kiska: We must use all lawful means available against extremism 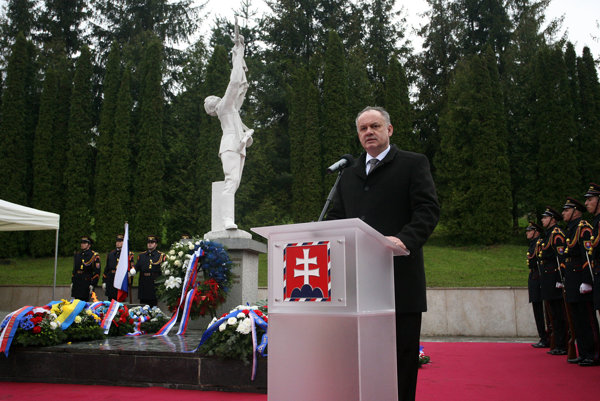 People in Slovakia should not just get used to the fact that extremist statements are being uttered by publicly active people and used as expressions of anger on social networks, President Andrej Kiska said at a commemorative event marking the end of WWII in Kalinov (Prešov region) on Monday, May 8. Kalinov was the first village liberated in Slovakia.

“We shouldn’t be overlooking this evil, showing indifference to it. We must intervene with all lawful means available,” said President Kiska at the Liberation Memorial, as cited by the TASR newswire.

The president added that the ideology of hatred was defeated in military terms on May 8, 1945, but it was not uprooted entirely.

“This evil, unfortunately, has survived in the heads of those who’ve again made their contempt for human dignity and the incitement of hatred against people of different colours of skin and different religions, their political programme,” said Kiska.

The Slovak people have the right to defend themselves against “fascists marching in the streets wearing green T-shirts and MPs disseminating hatred and intolerance in ironed out suits,” said the president in reference to the sympathisers and MPs of the far-right Kotleba-People’s Party Our Slovakia, respectively.

Kiska at the commemorative event bestowed state awards to two Russian and two Ukrainian war veterans who took part in the liberation of Slovakia in WWII. One of them, Nikolai Alexandrovich Melnikov, received the award in person. 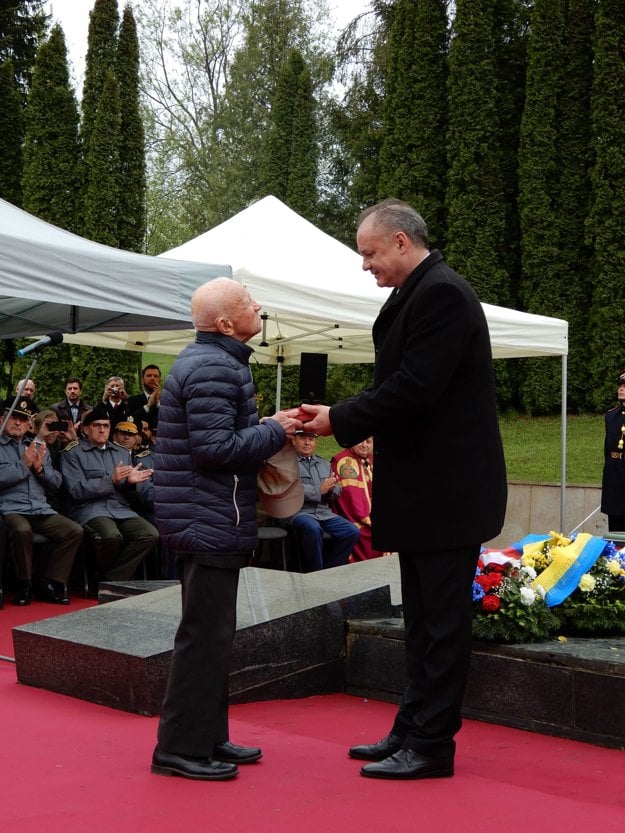 The event was also attended by Defence Minister Peter Gajdoš, who in his comments, praised the fact that many young people came to pay tribute to the fallen in WWII, and stressed that education on the “atrocities of the war” must be a firm part of the education of the young.

Vice-premier for Investments and Informatisation Peter Pellegrini marked Victory Day over Fascism in Banská Bystrica on Friday, May 5. He said during the wreath-laying ceremony, that a clear message must be voiced from Banská Bystrica’s Slovak National Uprising Square, that Slovaks respect the values for which their grandfathers and great-grandfathers laid down their lives and do not ever want to experience the likes of WW2 again.

Pellegrini claimed that he cannot bear to witness the latest developments in the Banská Bystrica region any longer.

“As I stand here, in my home town, on the Slovak National Uprising Square, I feel pangs of sadness at the realisation that a man who put up black flags on this square to mark the 70th anniversary of the Slovak National Uprising, is looking at us through the window of his office [reference to far-right Banská Bystrica regional governor, Marian Kotleba - ed.note],” said Pellegrini as cited by TASR. “Almost for four years, this person has stood at the helm of our region, the region that once showed the right path to the whole of Slovakia. Today, however, it is the region that breeds and spreads concerns, fear and hate across our homeland.”

The Vice-premier stated that he is saddened at how the face of Banská Bystrica, which had symbolised values of democracy and antifascist resistance for 70 years, has been corrupted by its association with the political party that disregards democratic traditions and intends to “rip out” Slovakia from the EU and make it a black hole of Europe.

“It is not only history textbooks but also the tales of our grandparents that remind us that it was the weakest and most vulnerable members of society who fell as the first victims of the fascist totalitarian regime,” said Pellegrini.