But a slight drop is expected to occur in the following months.

Slovakia’s exports and imports continued growing in March. While the total export of goods amounted to €6.7895 billion, which is a 16.5-percent increase year-on-year, total imports rose by 15.3 percent annually to €6.4128 billion.

The foreign trade balance thus amounted to €376.8 million, which is €106.2 million more than in March 2016, the Statistics Office informed on May 9.

“In an annual comparison, foreign trade was impacted by the Easter effect which delayed it to April,” Ľubomír Koršňák, analyst with UniCredit Bank Czech Republic and Slovakia, wrote in a memo.

As a result, both imports and exports grew significantly compared with the previous year. 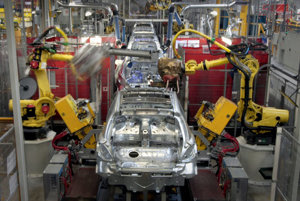 This may have been the result of lower industrial production during Easter in April, impacted by lower supplies of materials and semi-prepared products, Koršňák opines.

As for the following months, Koršňák expects that the foreign trade surplus will gradually decrease, particularly in the second half of the year. The fall will be only temporary, however, and will be mostly a result of the import of technologies linked to big investments in the automotive sector.

“After the launch of production, we expect that in 2018 (second half) and 2019 the foreign trade surpluses of Slovakia will increase again,” Koršňák added.