Fico: Police should intervene against extremists

Meanwhile, several prosecutions for committing extremist crimes have been launched. 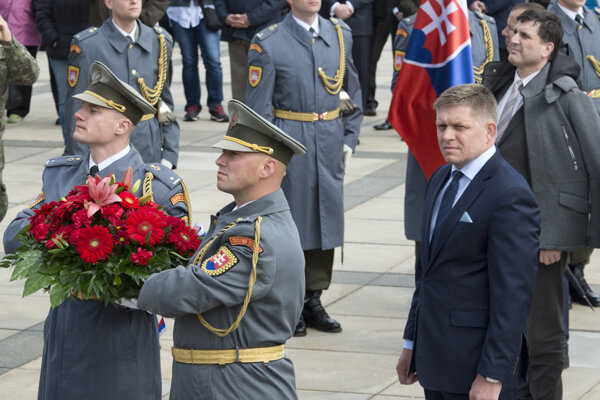 The law-enforcement authorities should take action as soon as possible to put a stop to displays of extremism perpetrated by a certain parliamentary party, Prime Minister Robert Fico (Smer-SD) said on May 9 during a commemorative event at the Slavín war memorial in Bratislava, marking the end of WWII.

The chairman of the party in question [far-right People’s Party – Our Slovakia (ĽSNS) led by Marian Kotleba – ed. note] has stated on TV that he has no opinion of the Holocaust, while another member of the party who was supposed to appear on a TV debate was accompanied by two armed guards, who were ostentatiously showing their guns.

Such behaviour resembles Adolf Hitler’s trips around Germany in the 1930s in the company of members of the SA paramilitary organisation, according to Fico.

“I’m appealing to law-enforcement authorities – take action, for God’s sake, because if this is viewed as something normal and part of the freedom of speech, we’re very wrong,” Fico said, as quoted by the TASR newswire. “This has nothing to do with democracy and values. The sooner we halt these displays, the better for this country.”