The growing number of men in Slovakia stay home with their children. But are the current rules sufficient? 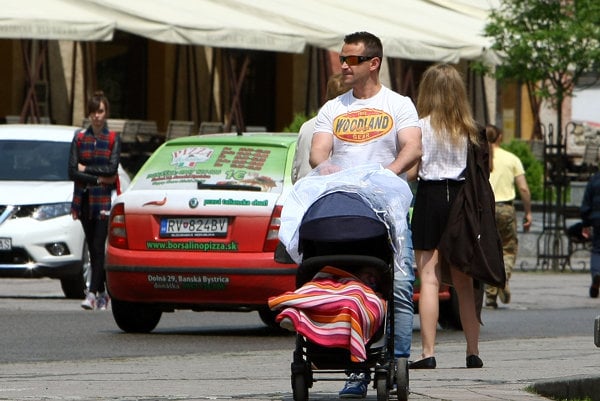 An increasing number of men are staying home with their children. (Source: SME)
Font size:A-|A+

“It was really a great time which cannot be bought or acquired in any other way,” says Peter Biely from Pezinok, who works in marketing, about the time he spent with his son on maternity leave.

Though Slovakia has no official “paternity leave”, its legislation allows men to stay home with their child for 28 weeks until the child reaches three years old, while receiving the maternity benefit. The official statistics of the state-run social insurer Sociálna Poisťovňa suggest that the number of men using this possibility is increasing, though former labour minister Jozef Mihál, who introduced this change, claims the number would be even higher if the awareness was better.

And while the Labour Ministry first claimed that the current rules are sufficient, Prime Minister Robert Fico introduced planned changes to the Labour Code on May 1, part of which includes the introduction of paternity leave for men. Not everyone, however, considers the proposal a sufficient solution.

The amendment to the law on social insurance, allowing men to draw maternity benefits, came into force in 2011, initiated by Mihál, who now serves as non-affiliated MP.

“Men had to pay sickness insurance just as women but unlike them, they could not draw the maternity benefits,” Mihál told The Slovak Spectator, when explaining the main reason for the change.

One of the reasons for the growing interest of men in this kind of leave is the increasing sum provided in the form of the maternity benefit, says Michal Stuška, spokesperson for the Labour Ministry.

Currently, the maternity benefit equals 70 percent of the salary, but it increases to 75 percent as of May. This means that people drawing the benefits will receive nearly all of their net salary.

“The fathers thus have a good opportunity to stay at home with their child for a relatively long time, while the family will not see a considerable loss of income as if the father received only parental allowance,” Stuška told The Slovak Spectator. The parental allowance currently amounts to €203.20, but increases by €10 as of May 2017.

Another positive feature is flexibility as men can decide to draw the benefits after the women stop drawing them, Stuška added.

Money is not the main reason

The number of men on maternity leave might have been even higher if the awareness about this possibility was better, Mihál opines. According to him, men are able to work alongside the maternity leave, though only under some specific conditions, which can even increase the family budget.

Though money is a strong motivator, fathers addressed by The Slovak Spectator agree that it was more important for them to spend time with their children and take care of them.

“From the viewpoint of a father, it is great as I can spend a nice time with my child,” says Tomáš Kubica, a lawyer from Trstená, adding he would recommend it to everybody who has the possibility to do so. “A person can build a relationship with the child and help the family, and also society.”

Also Daniel Grigar from Bratislava, who works as a manager at 3T – Tri Tvorivé Tvory theatre, praises the time he can spend on maternity leave with his son.

“A person needs to prepare for many changes to his life, but I certainly recommend it,” he added.

Janka Debrecéniová from the non-governmental organisation Citizen, Democracy and Accountability, however says that the system should be more flexible and parallel than it is now. Currently, it works in a way that first, it is the mother who takes care of the child, and then after some time she can be exchanged by the father. During the first months, however, mothers acquire more skills in childcare and develops a deeper relationship with the child, which may be very hard for fathers to catch up with, she said.

Moreover, there is no relevant data on how the system actually works among families and how caring for the child and also the household is distributed, Debrecéniová added.

“The state should invest into making it possible for both parents to learn about and acquire relevant skills, share responsibilities equally, and spend everyday time together and enjoy parenthood,” she told The Slovak Spectator, adding that the current model does not allow it.

All can be found on the internet

One of the basic conditions for men who want to stay on maternity leave is to pay the sickness insurance for at least 270 days at least two years before submitting an application.

Moreover, the men need to claim in writing that they take the child into their care, and the women need to agree with it. The law also prohibits men from receiving a salary for active work while being on maternity leave.

Men receive the maternity benefits for 28 weeks (unlike women who usually receive the sum for 34 weeks). Moreover, women can ask for the benefits six-eight weeks before the child is born, while men are entitled to do so only six weeks after the child is born, Peter Višváder, spokesperson for Sociálna Poisťovňa, told The Slovak Spectator.

Fathers addressed by The Slovak Spectator say there is no problem finding relevant information about maternity leave for fathers and documents they need to submit to respective authorities. All of them also praise the help from their employers and Sociálna Poisťovňa in providing them with the necessary information.

Though the whole process is more or less trouble-free, Grigar pointed to one absurdity of the system. Men starting the maternity leave have to report this to the respective labour office. The office, however, has one month to decide whether to accept it or not.

A situation arose when a man’s wife had already started working, he was staying home with their son, but still lacking the official document from the labour office stating that he is on maternity leave.

“I think about what would happen if the office did not approve it,” Grigar said.

The European Union, meanwhile, is discussing the possibilities of introducing rules for paternity leave that would be binding for all of its member states.

The European Commission introduced a proposal suggesting at least 10-day leave for men after their child is born and the possibility to transfer all four months of parental leave from one parent to the other, the ČTK newswire reported in late April.

As for the payment, the government expects that men will receive a sum equivalent to 10 days of their average salary. The condition is that they have to live in one household with the mother of the child, regardless if they are married or not, the Sme daily reported.

There have been several proposals aimed at introducing the principle to the Slovak legislation. Back in 2015, the Christian Democratic Movement (KDH) came up with a proposal to allow men to draw the benefits for one week within the first month after childbirth. The change sought to improve the atmosphere in families and help women when they come back from maternity hospitals, which in the end improves the situation in the society, the party claimed, as reported by the SITA newswire. The parliament failed to approve the change, however.

Also Mihál together with other non-affiliated MPs Miroslav Beblavý and Simona Petrík submitted in mid-April 2017 a proposal to the parliament, introducing a two-week paternity leave after a child is born, with men receiving 75 percent of their salary.
“It is proven that paternity leave leads to higher engagement of fathers in childcare,” reads the press release sent to the media.

The proposal will be discussed at the May parliamentary session, and Mihál hopes it will be approved.

Before Fico introduced the planned changes, Stuška told The Slovak Spectator that the ministry was not planning any changes in this field, calling the current system “flexible and motivating enough”.

“Conversely, our system is also interesting for other EU countries as a model of equal parenthood and a non-discriminatory approach to childcare,” Stuška said.

Debrecéniová notes that the recent governmental proposal is not a systemic and efficient measure either.

“Although 10 days is better than nothing, fathers are not here to ‘help’ mothers with care for their own children, as the prime minister indicated, but to share the caring and household responsibilities equally,” she added.

She suggests that this should start in maternity hospitals, where fathers are, however, usually not allowed to stay and care for the child, and should last throughout the child’s earliest months or years when parents predominantly provide the care.

“Both parents have the right to perform a paid job if they choose so, and at the same time they both have the right but also the duty to provide personal care for their child,” Debrecéniová continued. “There is no rational reason why the state should insist on the model of one parent exercising a full time paid job and the other parent exercising full time care for a child.”