The first written mentions of butchers in the territory of Slovakia date back to the 13th century. 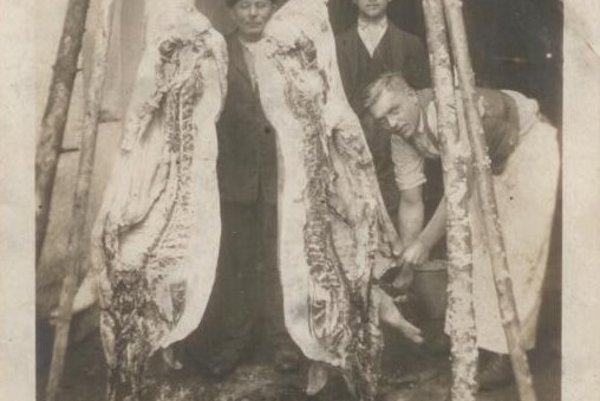 Butchery used to be a profitable, well-respected craft. (Source: Courtesy of B. Chovan)
Font size:A-|A+

However, this does not mean that meat had not been processed here earlier. Before butchers appeared, meat was processed in family households, and this self-sufficiency remained for a long time, especially in the countryside. In towns and cities, butchery was established quite quickly as a distinctive profession.

During the 15th century, butchers started to also deal with livestock, which elevated them to the more well-off classes of craftsmen. The craft was profitable and butchers' guilds mushroomed; initially mostly in mining towns full of miners who were always hungry.

The promised land for stock traders used to be the region of Spiš. In 1770, for example, there were only 21 stock traders in Bratislava, but there were 27 of them in Kežmarok, and in Levoča 30.

The butchers in Spišské Podhradie were famous as masters of smoking meat. Their Spišské párky / Zips Frankfurters, well-known even todays, were sought-after in the whole of Great Hungary and were also exported to other European countries.

What did a traditional butchery workshop look like? Usually, it was composed of three rooms: in the first, animals were slaughtered and the meat processed, in the second, it was smoked, and in the third it was sold. In smaller towns and villages, there were also pigsties built adjacent to the workshop, where fattened pigs awaited their end.

In this photo from the 1920s, we see a butcher from the Small Carpathian town of Modra at work. Behind the meat chunks hung on the hook, owners of the late pig pose proudly. They were surely warmed also by the wine which was drunk abundantly during pig slaughterings, as well as by the idea that their larder would be filled with tasty meat for months to come.