Savchenko is a traitor and people have extraterrestrial blood are hoaxes

The Slovak Spectator brings a selection of hoaxes that appeared on the internet in Slovakia over the past week. 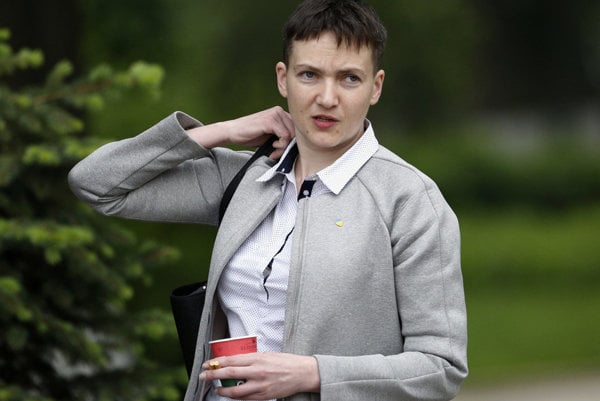 Savchenko is a traitor is a hoax

There is a text circulating on the internet, which originates from the Russian social network VKontakte. Ukrainian soldier and politician Nadia Savchenko is the alleged author of the text which reads that Russia is not the aggressor and did not start the war in Ukraine, and that the Ukrainian army was killing its own citizens.

This is a propaganda hoax that also appeared on the Slovak “alternative” news website Hlavne Spravy. Their translation of the text into Slovak got over 2,300 likes on Facebook.

But the Facebook page Disinformation, Hoaxes, Propaganda noted that Savchenko’s profile on VK is fake. Also, there are several profiles with Savchenko’s name on the social network.

Savchenko herself distanced herself from the text and on her official Facebook profile she published the status of her sister Vira who wrote that the profile and the letter are both fake.

Hlavné Správy later added the information about Savchenko’s sister to their text but then questioned it with the claim that the two sisters are not close.

Under the threat of being fired from their jobs, the municipal authorities of Topoľčany forced the staff of a dog shelter to delete pictures of ĽSNS members from its Facebook page. The party members donated dog food and other supplies to the shelter. This was the information that people from the Topoľčany branch of the ĽSNS published on their Facebook profile.

The post was subsequently “liked” and shared by dozens of people, mostly ĽSNS supporters.

The quarantine station in Topoľčany, however, denied the information in the post. They said that indeed three men brought a pack of dog food and three sacks of things to be used as bedding for the dogs. They also took pictures, wearing the green-coloured T-shirts of the party, and posted the pictures on Facebook.

But a volunteer from the shelter then asked them to remove the pictures.

“They spent maximum ten minutes in the quarantine altogether, they petted one dog and then took pictures,” the shelter staff wrote on Facebook. “We would have no problem with that, if they were not dressed in party T-shirts.”

Ján Kecskés from ĽSNS reacted by posting a status on Facebook that the municipal authorities in Topoľčany threatened the shelter staff that they would lose their jobs if they did not remove the pictures with Kotleba people.

The staff of the shelter deny the accusations.

“Nobody from the municipality contacted us, nobody threatened that we would lose our jobs,” the quarantine station wrote to the Sme daily. People who work for the shelter are volunteers and do the job free of charge, so there is basically no job to lose.

“Any statements that the quarantine would be closed are pure non-sense,” they wrote to Sme.

The shelter staff opposed the fact that the pictures from their facility were used for political promotion. It is not the first time that ĽSNS used charity for such purposes. On March 14, at an event organised by the party, they distributed larger-than-life cheques to families in need, in the amount of €1488. The number is a symbol in the neo-Nazi community.

Extra-terrestrial blood is a hoax

People with the Rh negative blood type might not be from Earth. Scientists believe they might be seers, they have a lower body temperature and some have spare ribs. Their blood might be proof of the existence of an unknown type of civilisation.

This information appeared in early May on a Slovak website that publishes shocking and unfounded news. It originates from various foreign conspiracy websites. The articles are based on the claim that people with Rh negative blood must have some other, divine or extraterrestrial, ancestor. The main proof is supposedly the fact that individuals with Rh+ and Rh- blood types are incompatible and their union might lead to death.

The entire hypothesis is based on an erroneous understanding of blood groups, antigens, and antibodies.

There are approximately 32 blood types in humans, while the best known classifications are the AB0 system and the Rh factor. The authors of the hoax only focus on the latter.

The Rh+ and Rh- label is used exclusively for the D antigen. But there are approximately 50 other similar antigens in human blood and in the Rh system.

The hoax is mainly referring to the fact that Rh+ and Rh- blood types represent a threat in transfusion and pregnancy. The blood of the pregnant mother or the blood of the recipient of transfusion, if it is Rh-, starts producing antibodies in contact with Rh+ blood (of the newborn or of the transfusion donor). The first transfusion or the first pregnancy are not problematic, but in the next pregnancy or transfusion, the antibodies start attacking the “foreign” Rh+ erythrocytes. They start clustering, decomposing, and finally cause a serious illness or even death.

There is, however, the Rh immunoglobulin vaccination that is used for pregnant mothers.

The same process of antibodies production goes for all other antigens, not just the D antigen. The immune system is protecting the body from substances that are unknown to it.

The Slovak Spectator brings a selection of hoaxes that were published on the internet and shared by Slovak users on social networks in cooperation with the Sme daily, which runs the project aimed at spotting hoaxes and confronting them with facts.