PM Fico: Investors should clearly declare whether they have encountered corruption or not

Representatives of the biggest investors in Slovakia met with Fico to discuss the local business environment. 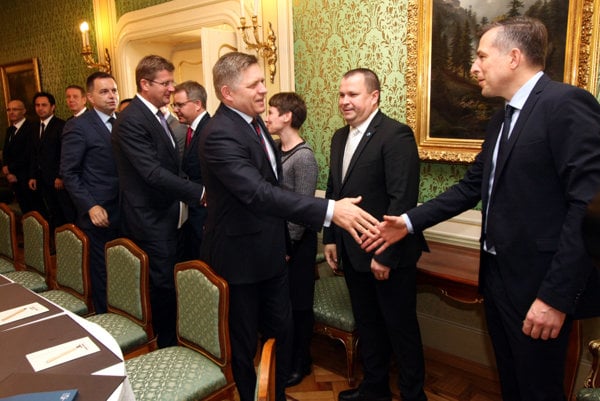 Slovak Prime Minister Robert Fico calls on foreign investors to disclose whether they have encountered any non-transparent or corrupt behaviour while doing business in Slovakia. If not, they should declare this clearly. On May 22, PM Fico met with representatives of 14 large foreign investors in Slovakia including representatives of carmakers, the online retailer Amazon and Whirlpool to discuss the business environment in Slovakia. Economy Minister Peter Žiga and Finance Minister Peter Kažimír also attended the meeting.

Fico expects that companies will express their interest in creating a transparent environment in Slovakia via a declaration of cooperation with the Slovak cabinet.

Fico and the representatives of the investors also discussed the need to secure a qualified labour force. The labour market is currently lacking between 40,000 and 50,000 qualified workers and due to this companies are pushing the cabinet to enable the import of foreign workers to Slovakia.

“We want to focus on the topic of dual education and mobility of the labour force because this is very low in Slovakia and also topics related to the accommodation of employees, or new forms of employment,” said Fico.

Another discussion topic was the support of science and research. In this respect Fico said that Slovakia is a country of interest from the viewpoint of investments but that the quality of an investment matters more than quantity. Thus he expects from investors , in exchange for various forms of support, proposals on how they would support science and research while investing in Slovakia.

Fico in this respect reiterated that Slovakia is increasingly attractive for R&D investments.

“While companies can now deduct for each euro invested into research and development €1.25 from their taxes, this so-called super deduction will increase to €2 as of January1, 2018,” said Fico.

Fico and the investors also discussed the possibilities of involving as many Slovak companies as possible in the chains of subcontractors.

“We want to create a system that guarantees as high a share of sub-contractors from Slovakia as possible with foreign investors,” said Fico.

Ralf Sacht, CEO of Volkswagen Slovakia, described the discussion as constructive and acknowledged the will of the cabinet to enter into discussions with investors. They also spoke about building infrastructure. More meetings will follow, the TASR newswire reported.

Michal Major, general director of Whirlpool Slovakia from Spišská Nová Ves in eastern Slovakia, said that the lack of a labour force in this area is a big problem. At Whirlpool Slovakia they have solved it by hiring people from marginalised groups and offering upper-standard wages.