The main election committee selected eight members of the Judicial Council on May 23. 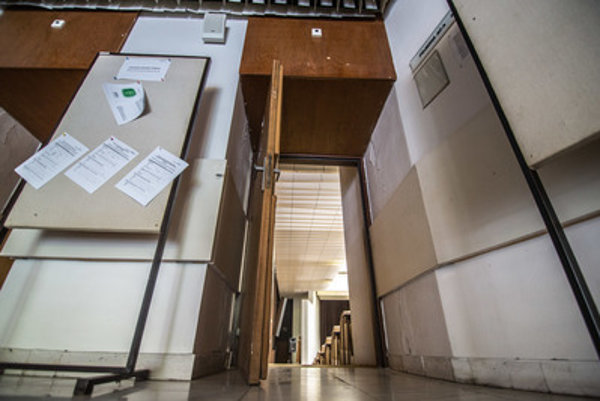 Eight judges for the Judicial Council were elected May 23. (Source: SITA)
Font size:A-|A+

Committee chairman Pavol Tomáš announced the results of the Judicial Council election to the media on May 24 in Bratislava.

A total of 1,195 judges took part in the election, the TASR newswire wrote. All eight candidates nominated by the professional organisation the Slovak Judges Association (ZSS) won their elections. Conversely, none of the candidates proposed by the judges' association For Open Justice were elected.

Judicial Council chair Jana Bajánková was not present for the announcement of the election results. The newly-elected council members will be officially appointed on June 1. The election committee has invited to the appointment cermeony several constitutional officials, including the president, the speaker of parliament, the prime minister, the justice minister and the chairs of the Judicial Council, the Supreme Court, the Constitutional Court and the parliamentary constitutional committee.

The Judicial Council's new leadership should emerge at the first session of the new configuration, probably this autumn. Until then, the Council will be led by its oldest member, lawyer Ján Havlát. The Judicial Council in its current composition is scheduled to for the last time on June 26.

Judges are allocated nine representatives on the 18-member Judicial Council. The ninth post was filled in November 2014 with the election of current Supreme Court judge Dušan Čimo.

Lawyer Peter Wilfling of the Via Iuris civic association commented for the Sme daily on the election results, noting that they send a surprising signal: the ZSS, led by Juraj Sopoliga, has in the past defended Stefan Harabin against his critics, while For Open Justice has counted itself among his critics.

“We expected the judges to elect representatives of different opinions and stances,” Wilfling said to Sme, “as the diversity contributes to a better-functioning Judicial Council and judiciary in general. Thus, Slovak judges sent a very surprising signal, and it should be considered and analysed.”

The judges selected have so far not publicly commented on the Slovak judiciary, and their opinions are not widely known – with the exceptions of Daniel Hudák and Ján Burik, Wilfling said. Thus, it will be important to watch their activities and decision-making in the Judicial Council. “We hope that the newly elected members will tackle the acute problem of the untrustworthiness of the Slovak judiciary,” Wilfling said.

The head of ZSS, Juraj Sopoliga, told the SITA newswire that he was optimistic about the strong participation of his colleagues in the election. He also praised the candidates' responsibility and experience with the problems facing the judiciary earned by managing administration and self-administration of the courts and ZSS bodies.

Sopoliga also expressed his view that increased communication of the elected members of the Judicial Council with the bodies of judges’ self-administration, courts’ administration and the ZSS, will provide timely solutions to several flaws in the judicicary. He said this will be of benefit to the citizens and well-respected by the executive and legislative powers.

Head of the Judicial Council Jana Bajánková told SITA that she “respected the election results and thanks all those judges who, by their participation in the vote, confirmed that they do care about who will represent them in the Council”. She also said she wished well for the newly-elected members in their work to boost an independent and democratic judiciary. The results confirmed the importance of regional self-administrations, as most of the candidates who had the support of local councils of judges were elected, according to Bajánková.

Justice Minister Lucia Žitňanská said that she encourages communicate among all judges and that this will improve with the new composition of the Judicial Council.