Who wants to live forever?

Around three quarters of doctors and nurses find it difficult to talk about death with their patients. 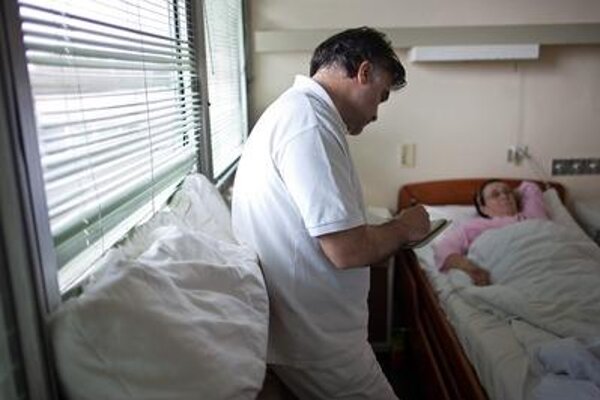 Approximately 69 percent of Slovaks think that death is a topic with which they feel uncomfortable or that it’s not worth talking about, according to a survey conducted last summer by the STEM/MARK agency for the not-for-profit organisation, Viaticus. As many as 79 percent of respondents said they would like to die at home and not in hospices and hospitals but only a third of them have experienced what it means to take care of a dying person. The survey found out that the lack of financial means, the burden on family life and the stress of the lack of the required professional carer are the main causes of why more than half of Slovaks who died between 2011 and 2015 did so in healthcare facilities.

"Slovakia is at the very bottom among the EU countries when it comes to the numbers of years a person lives in good health, 52 for both men and women," says sociologist Zora Bútorová. At the end of April the average old age pension reached €427,02 per month, less than the minimum guaranteed wage (€435) with men getting on average €474,95 and women €380,70. About 80 percent of Slovak pensioners have been complaining that they can barely make ends meet. Thus many are often pushed into social isolation and the lack of an active life is what worries health experts who warn that it leads to a faster deterioration of seniors’ mental and physical wellbeing. Moving to a retirement home is a real challenge due to the chronic shortage of affordable facilities. Waiting lists can be seen on the websites of all retirement homes, no matter if state run or private. The cheaper the monthly fee, the longer the queue. In addition to this, retirement homes are often faced with shortages of the qualified healthcare personnel who would tend to the special needs of, for example, clients suffering from dementia.

Younger Slovaks do not fare any better when confronted with the diagnose of a terminal illness. Although Slovak doctors have (finally) learnt not to give such news in the corridor in front of all the other patients and some hospitals even have psychologists (usually volunteers working for patients’ organisations or charities) who could offer their help, many struggle with the idea that the impossibility of curing somebody because medical science does not have a solution for that particular disease, is perceived as a personal failure by the doctor. According to the above mentioned survey which also included a focus group with Slovak doctors and nurses, around three quarters of them find it difficult to talk about death with their patients. Some blame the workload for this situation. Others say that in other countries with better financed and organised healthcare systems, hospitals have a team of in-house psychologists to assist the medical personnel dealing with terminally ill patients. Religion is another reason some medical personnel might find it difficult to talk about death and dying. While medicine aims at reducing pain and suffering, from the theological point of view, the suffering of a dying person has some spiritual meaning. In a self-proclaimed Catholic country like Slovakia, religious groups have made sure that very conservative legislation governing bioethical questions has been put in place and no serious attempts to bring it to the realities of anno domini 2017 are to be seen on the horizon.

PR stunts such as that of Facebook’s founder Mark Zuckerberg and his wife, who became the latest to join the group of rich tech wizzes who pledge billions of dollars to the cause of curing all disease, are not helpful either. Apart from amusing the famous leftist philosopher, Slavoj Žižek, who mutters that technology can make us immortal in an economic system in which it’s a struggle to add some extra money to the healthcare sector, they also put pressure on many doctors already struggling with the so called concept of “victorious medicine”.

Honest and open communication with patients is the only way out, no matter how hard it might seem in practice. For the time being, nobody lives forever, no matter what they write in FB’s manifestos.