High temperatures are leading many people to go swimming in newly re-opened outdoor pools, or lidos. 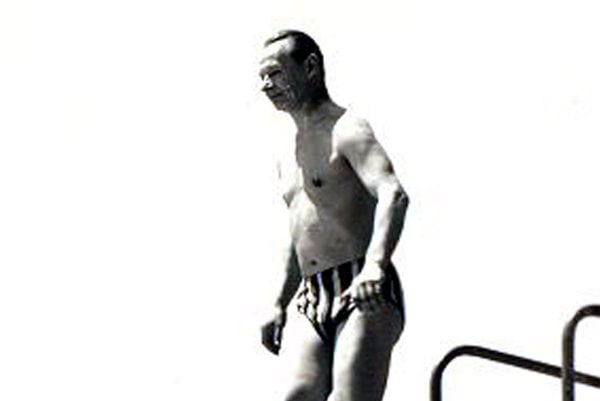 The www.sodsO2.sk website has suggested some 20 of the best regional swimming sites, admittedly chosen through personal taste and knowledge of the country.

Only those which offer a good ratio between price and quality have been included, while outspoken aqua-parks were dismissed. All the recommended ones are unique in some way, be it thermal or healing water, good atmosphere, special toboggans or services.

The list starts with No 20., the Makovica (Poppy Head) pool in Nižná Polianka near the eastern-Slovak town of Bardejov – allegedly offering a homely atmosphere – and continues with No 19, the Dúha summer pool in Partizánske, with the confirmed reputation of the best regional swimming pool.

No 18 is the thermal swimming site Vincov Les in Sládkovičovo in western Slovakia, offering five pools with healing water; and No 17 is the beach lido in Žiar nad Hronom, with many sport possibilities and facilities (badminton, soft tennis, table tennis, etc.).

The thermal swimming site with two pools, Laura in Rajecké Teplice, No 16 of the list, has a mini-golf and beach volleyball facility, among other things.

The natural lido in Levočská dolina vally, called Biokúpalisko, is the first of tis kind in the eastern-Slovak region of Spiš, and the No 15. The water is filtered without chemicals, thanks to algae. Another bio-swimming site, Biokúpalisko Sninské rybníky, No 14, is composed of fish ponds close to the town of Snina in eastern Slovakia. It also offers playgrounds and sporting grounds.

No 13, the Triton swimming site in Košice, has three pools and a toboggan. The No 12 – Izabela swimming resort in Vyšné Ružbachy is special because of the healing thermal water supplied from the nearby spa.

No 11 is the summer thermal outdoor poll in Santovka, famous for the stays of late politician, communist-time leader but also later dissident Alexander Dubček. The outdoor pools are filled with healing thermal water good for rheumatism and cardio-vascular system.

The Veronika complex in v Rajec, no 1é, includes eight pools – complete with toboggans – in the small town of Rajec, near the city of Žilina; while No 9. summer swimming site Na Sihoti in the western-Slovak city of Nitra, lies in the city park with a charming view of the Nitra Castle.

Another naturally-filled swimming complex is Biokúpalisko Krtko in Veľký Krtíš, No 8 on the list, with clean and good-quality water. 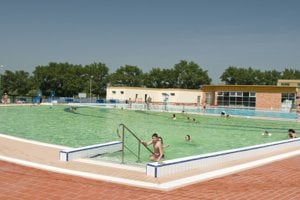 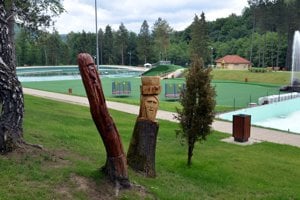 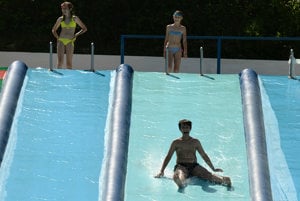 Most attractive open-air pools and lidos in Slovakia (10 photos)

The famous swimming place, Podhájska in south-western Slovakia – No 7 – is unique through is strongly mineralised water comparable to that from the Dead Sea that comes form a drill 1,900 metres deep. No 6, the thermal swimming site Vrbov near Kežmarok in north-eastern Slovakia, also has the water coming form the depth of 2,000 metres; which fills nine pools.

Holidaypark in Kováčová near Zvolen in central Slovakia, No 5, has replaced the original thermal swimming sites with long traditions – built in 1969, it was renovated in 2013. It has the same water as famous spa in Kováčová. No 4, Čajka in Bojnice, lies in western Slovakia, adjacent to the popular Bojncie Castle and close to the local zoo. Five pools contain thermal water.

No 3 is the Zelená žaba swimming complex in v Trenčianske Teplice, the highest-altitude swimming site in central Europe, a sit is built on the southern slope of the Teplická vrchovina hill range above the town park. The pool was partially carved into the rock on a hill.

No 2. is Plaza Beach in Prešov, the summer swimming site at Solivar in Prešov, a holiday-feeling complex with a lagoon pool, live palms, and sport facilities.

The No 1 and the total winner is the beach lido in Banská Bystrica, a vast complex with many attractions, a natural lake, with water bicycles, wakeboarding track 400 metres long, a water fun park, playgrounds and sporting grounds, with aqua-zorbing and more, the website concludes.