The loss of small bookstores

How are small, family bookstores dealing with competition of bookstore chains? 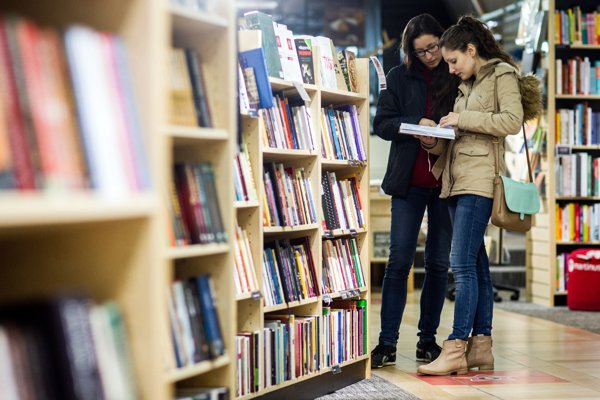 A glossary of words as well as exercises related to this article are also published online.

There is a bookstore in every bigger shopping centre in Slovakia, usually one that is part of a major chain. While Martinus has only nine bookstores in eight cities around Slovakia, Panta Rhei is leading with 40 bookshops in 23 cities. How are small, family bookstores dealing with such competition?

Some bookstores have silently disappeared from the cities over the last 10 years. In Bratislava, it was Modul, Osveta, Slovenský Spisovateľ, Reduta and Luxor. In smaller towns, some of them are still surviving.

In Trnava, the AF Trnava bookstore emerged in 2011 after the Artforum store, which had been functioning for six years, closed down. Peter Volek, bookstore administrator, admits that competing with bookstore chains is really hard, especially when there is only one person taking care of the shop, as in his case. Many of his customers are regulars.

“Some of them got used to the specific atmosphere and the offer of the best books which are currently on sale,” Volek told The Slovak Spectator, adding that new customers who come usually do not care where they shop for books.

Volek is trying to widen the circle of his customers with literary evenings with special guests, as well as writing to the regional newspaper about interesting books.

Online shopping for books has become popular among Slovaks, as many people consider it more comfortable. Browsing a website, one cannot open the book and have a look, but for those looking for a specific book, it’s definitely the fastest and most comfortable way.

Online shopping is a factor which matters for the success of non-chain bookstores, says Štefan Hamza, owner of the Christiania bookstore in Poprad.

“Without an e-shop or presence in the virtual world it’s really hard to sell, that’s why we have it,” Hamza explained. Christiania launched its e-shop in 2015. At minimum, it allows readers to see whether the bookstore has a particular book or not, the owner added.

The story of Christiania is rather different, because even though it doesn’t belong to a chain of bookstores, it has a 25-year-long tradition in Poprad. It’s still very popular despite the competition of Martinus and Panta Rhei.

AF Trnava does not offer the possibility to shop online.

“I don’t sell books via the internet because I like having personal contact with customers,” explains Volek.

Bestsellers and book charts in chain bookstores usually do not differ from each other. What can people expect in a smaller bookstore?

Volek does not concentrate on selling bestsellers. Even if he did, be believes the chart would look different.

“Contrary to chains, I choose what I will sell. In other words, I avoid ‘pulp’,” he added.

In Christiania, Hamza is trying to have the widest possible offer and high-quality literature.

“We don’t avoid art or books that only sell a low volume if we think that they are unique with the content, processing or message,” the owner of Christiania explained for The Slovak Spectator.

However, Hamza admits that the chart of bestsellers in Christiania are similar to the charts of chain bookstores, at least the first few top sellers.

It’s not surprising that not only books on offer, but also the look of the bookstores belonging to a chain are the same. Chains are taking the majority of the book market and they look like they all come from one stencil, said Hamza.

“In smaller bookstores, one can find plenty of regional authors who have no chance at getting into the bookstores chains,” Volek from AF Trnava stated. He also pointed out the unique atmosphere of small bookstores, as each of them has something special.

By shopping in a small bookshop, readers also support a local company, according to Hamza from Christiania.

“In most smaller bookstores, you will find people who love books and understand them, because otherwise they would not do this kind of business,” summed up Hamza.