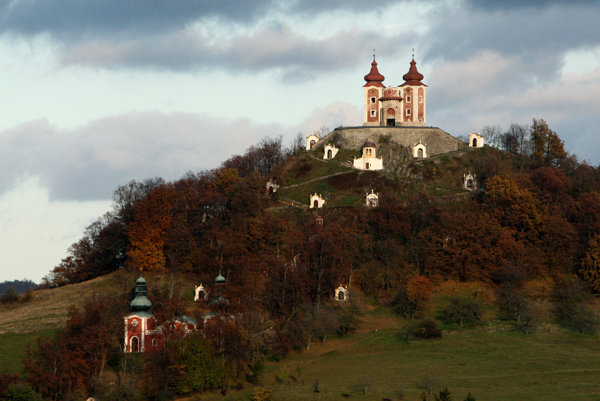 The baroque Calvary, one of the dominant features of the central-Slovak city of in Banská Štiavnica, was put on the list of the 100 most endangered monuments in the world in 2007. After almost 10 years of hard work and extensive investments, it is gradually regaining its former beauty. Restoration of the most visible Upper Church will be the last big phase of a thorough restoration of this site listed on the UNESCO World Heritage List.

“We have been preparing for the restoration of the Upper Church for several years,” said Martin Macharik, chairman of the Kalvársky Fond (Calvary fund) whose main task is to take care of the Calvary, as cited in a press release. “So far we have solved the static problems.”

“The large entrance portal is a piece of art, which was destroyed by an artillery grenade in the spring of 1945,” said Macharik. “Even today we are removing pieces of the shell from the facade and so one could say that we are removing the consequences of the war after 72 years.” 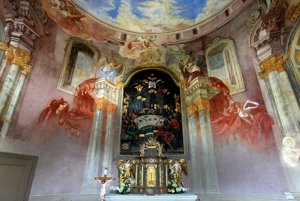 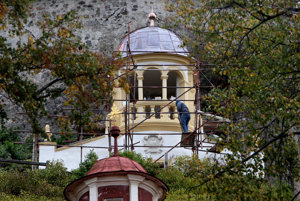 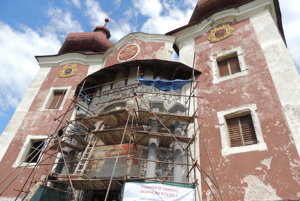 It will be co-financed by the Nadácia VÚB, the foundation of the VÚB bank. The foundation has been a partner of the restoration project since 2008. That year it promised to contribute €664,000 over the following 10 years. In 2016 it promised to contribute an additional €100,000 annually. Its total contributions so far have amounted to more than €770,000, historically the biggest contribution of a private company for a concrete culture project.

“Ten years ago the Calvary was put on the list of the 100 most endangered monuments in the world,” recalled Alexander Resch, the head of the foundation and the director of the bank. “Today we are only one step away from re-introducing this gem to the public in its full beauty.” 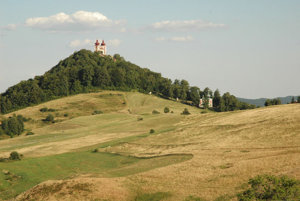 The Calvary, which dates from the middle of the 18th century, consists of 25 structures – including three churches and 17 chapels, depicting key moments from the life of Jesus and the seven sorrows of his mother the Virgin Mary – which all originally contained rich decorations including frescoes, wooden and stone reliefs, and sculptures.

The latest restored piece is the Ecce Homo chapel. Its restoration took from 2013 until 2016. The chapel has two levels. The first one features the scene of Christ in prison and the second one the condemned Christ with Pilate, who is washing his hands. The works cost €90,000.

Apart from the foundation Nadácia VÚB, the energy distributor Stredoslovenská Energetika, the Culture Ministry, the World Monuments Fund and individuals have also supported the restoration. In 2008 the cost of the whole Calvary restoration project was estimated at more than €3 million.

After years of neglect, the Calvary now lures thousands of visitors annually. In 2017 more than 60,000 visitors are expected.

The baroque Calvary is free to visit year-round. In the Lower Church, there is an exhibition as well as a shop. At the foothill, where the Calvary starts, a new visitor centre with parking was opened last year.