US army will convoy across Slovakia

Drivers should prepare for increased traffic on June 13 and 14. 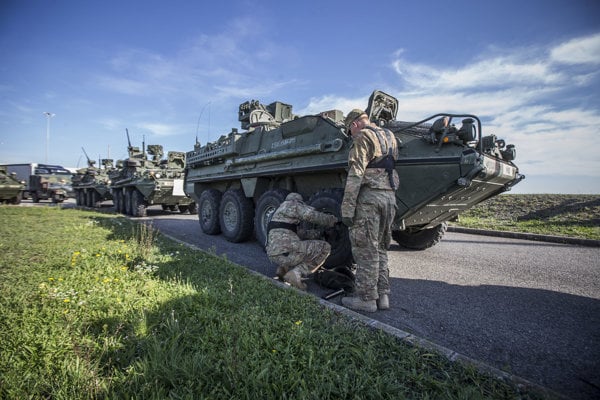 US soldiers and military technology will move across Slovakia, creating the first part of a convoy that will participate in the NATO Saber Guardian 2017 training held in Hungary, Romania and Bulgaria.

The convoy will only have an impact on communications in south-western Slovakia, the SITA newswire reported.

The military police will work with the police corps to secure the transit from the Czech border to the border with Hungary and reduce further traffic issues. Several vehicles with trailers will pass through the Slovak roads on June 13 and 14, from noon until evening.

Part of the technology will also be transported via railways from June 13 to June 15, said Slovak Defence Ministry’s spokesperson Danka Capáková.

The US army will move its technology to Saber Guardian 2017 training in several convoys during June and July. Approximately 25,000 soldiers are expected to participate in exercises held in Romania and Bulgaria between July 8 and 22.

Slovakia, as a NATO member state, will support its allies by securing the transit of convoys across its territory.

“We understand that the guarantee of these transits is a great training opportunity and challenge, and we prepare for it responsibly,” said Chief of General Staff of the Slovak Armed Forces Milan Maxim, as quoted by SITA.

Western Slovakia will see another transit of US army military vehicles on June 16, when a larger convoy will return from the Noble Jump training, SITA reported.