The winning project focused on debates and comments on social media. 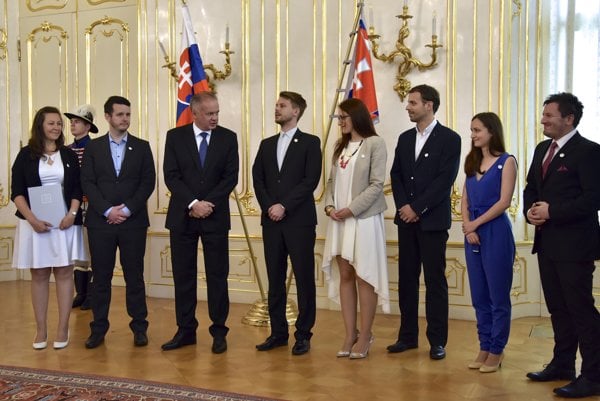 President Andrej Kiska awarded five projects in a competition triggered by his call against extremism. The main winner was a project entitled #somtu (#I’mhere), chosen from 139 submitted bids.

Slovakia in the contemporary era is waging a struggle for the character of the country, Kiska said at the award ceremony.

“One of the things that I find most concerning is the fact that extremism is on the rise,” Kiska said, as quoted by the TASR newswire. “And what is particularly sad for me is that it is mostly young people who are ready and willing to vote for extremists.”

The president said he does not consider these young people to be extremists but, rather, voters expressing resistance. This conclusion had prompted him to make the call for new ideas to counter extremism.

The eight-member team who worked on the winning project was led by Veronika Pavlíková Klindová.

“The purpose is to mobilise citizens and infuse debates with decency, facts and empathy so that non-hateful views – which carry messages – will also filter through to people,” said Pavlíková Klindová, as quoted by TASR.

Among other projects picked for the final was Patroll, Konšpirátori.sk, Argumentuj.sk by People against Racism and Real Truth, the creators of which intend to fight extremism and educate citizens through educational quizzes.

Creative programmers, psychologists and students answered the president’s call, proposing various websites, apps, campaigns, videos, games and school education tools. The members of the winning team will have the opportunity to familiarise themselves with top-notch innovations, research and startups by accompanying the president on one of his foreign trips, TASR reported.