May inflation rate brought some surprises

Analysts believe the higher inflation was tied to the rising costs of fruit.

In a monthly comparison, the consumer prices rose by 0.2 percent, according to the Slovak Statistics Office.

The annual increase in the prices surprised UniCredit Bank analyst Ľubomír Koršňák, who referred to projections by the bank and the market expectations that inflation would rise by only 0.9 percent in May.

“The quick increase in prices in May may be due to rising food costs and the recovery of demand inflation, which responds to the strengthening domestic consumer demand,” Koršňák wrote in a memo.

Inflation will continue increasing through summer

Food prices rose by 1.1 percent month-on-month, which may be due to seasonal factors. However, food prices also increased in annual comparisons from 1.9 to 3.5 percent, which may also be the result of an unstable season, as the price of fruit increased by 6.9 percent m/m.

“Unstable seasons have swayed the annual increases in food prices in May and summer months several times in the past,” Koršňák said.

Other foods whose prices increased significantly in May include meat, oils and fats, and non-alcoholic beverages. 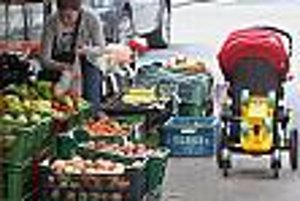 Read also:Analysts: inflation slowed down in April, expected to accelerate in May Read more

Tatra Banka analyst Tibor Lörincz agrees that food prices were the main factor behind the increase in consumer prices, while the impact of its previous driving forces, the transport and health service prices, slowed down slightly.

Inflation was mainly slowed by the prices of accommodation, particularly energy, he said in a memo.

Koršňák expects inflation to hover around 1 percent in the following months. He predicts that due to the weakening base effect of fuel prices and the potential correction of the May increase in fruit prices, the annual growth dynamics may slow slightly in June.

“The increase in dynamics of the annual growth in prices can already be expected in July, when the effect of last July’s drop in gas prices will expire,” Koršňák said, adding that the impact of demand inflation will also increase.

Lörincz anticipates an increase in inflation for the summer months, expecting it to approach 1.5 percent in annual terms. On the other hand, he predicts that the monthly increases will be lower, at just 0.1 percent.

“The average for 2017 should be slightly higher than 1 percent,” Lörincz said.