New era in roaming has begun

Following a series of staged cuts to mobile roaming fees, as of June 15, holiday-makers and short-term travellers can enjoy roaming with their mobile phones across Europe, free of extra charges. This means that they can make calls and send texts while abroad for the same price as at home. Regarding data services, however, this is not necessarily the case, as the European Commission has created a scheme for setting the limit for pre-paid data services to be used when abroad.

Slovakia’s Regulatory Office for Electronic Communication and Postal Services (RÚ) has warned that it will monitor operators closely and impose heavy fines on those that do not comply with the new regulation. If an operator fails to comply, it can face a fine of 5 percent of its turnover for the previous accounting period. 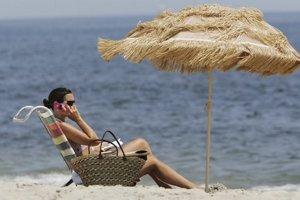 The European Commission (EC) sees eliminating roaming charges as one of the greatest and most tangible successes of the EU.

“Each time a European citizen crossed an EU border, be it for vacation, work, studies or just for a day, they had to worry about using their mobile phones and recently a high phone bill with roaming charges when they came home,” the EC wrote in its statement issued on June 14. “Roaming charges will now be a thing of the past.”

Three of four Slovak mobile operators waited till nearly the last minute to unveil how they have implemented the EC regulation on roaming into their products.

Customers of O2 have been benefiting from no roaming fees since June 13. Slovak Telekom and Orange Slovakia launched adapted products on June 15. 4ka, the newest mobile operator, unveiled its scheme for after June 15, only on June 13.

The new rules mean that citizens travelling in EU member countries including the United Kingdom, Norway, Iceland and Liechtenstein can call, text and browse the internet on mobile devices for the same rate they pay at home. But exceeding agreed upon minutes, texts and data will still be charged, thus mobile users should check the details of their plans with their providers.

Yet, in any case, this is not an easy task as each mobile operator has several product lines with packages containing different combinations of calls, text messages and data. This complicated structure also makes it difficult to compare operators’ individual products.

The various approaches of individual operators to the new rules also differ. For example, the newest mobile operator, 4ka, does not enable its clients to use its post-paid production line TO abroad. They should pay as they have only a pre-paid card Moja 4ka when abroad, the techbox.sk website points out.

The operator argues that neither the valid European legislation nor the Slovak regulations oblige mobile operators to provide international roaming as part of each of their products.

In the meantime, 4ka reiterates that it scrapped roaming fees in the EU immediately upon launching its voice services in October 2015, and that its customers can continue to make calls, send text messages and use data in the EU for €0.04 per megabyte without paying any additional fees.

The remaining three operators: Orange Slovakia, Slovak Telekom and O2, enable their customers to use post-paid programmes abroad. They have either prepared new product lines or adapted the existing ones.

“Roam like at Home” is not meant to be used for permanent roaming, i.e. permanent use of a SIM card from another country, the EC warns. The commission has set safeguards against abuses of this principle. Operators can detect possible abuses based on the balance of roaming and domestic activity over a four-month period. It requires that consumers use, during a four-month period, at least 51 percent of units, be it calls, text messages or data, in Slovakia.

Operators assure that this will not affect people on holiday or travelling abroad for a short period of time.

The regulation represents a relatively big change for mobile operators and will affect products across their portfolio.

“[The regulation] cancels roaming fees for customers but not for us,” said Tereza Molnár, spokesperson for O2. “Thus, operators will continue to pay fees to foreign operators when their customers use their networks.”

O2 also points to a certain disproportionality between European countries. While operators in Mediterranean countries, which enjoy a net inflow of tourists every year, will tend to benefit from roaming because they will receive fees from operators from other countries, countries that welcome fewer tourists will lose out.

“Unfortunately, Slovakia belongs among those countries in which the number of outgoing tourists exceeds the incoming figure,” said Molnár. “Thus, Slovak mobile operators will pay more to foreign operators for their customers roaming abroad than they receive from the roaming customers of other operators who visit Slovakia.”

Slovak Telekom (ST) agrees that the new rules have a negative impact on the operators.

“The costs per customers using roaming will increase compared to revenues we can obtain for visitors to Slovakia,” said Michal Korec, spokesperson of ST.

Therefore the upcoming holiday season will show how Slovak customers have adapted to the new conditions for using their mobile phones abroad. For now, the operators cannot exactly forecast the consumption of mobile services after scrapping roaming charges.

“In this moment the market does not know exactly what scrapping the roaming fees will mean,” said Igor Tóth, marketing director at O2. “In any case this will increase the costs of the operators without any compensation.”