Slovak cyclist Peter Sagan won two stages of the recent Tour de Suisse competition and may have changed his tactics before the upcoming Tour de France. 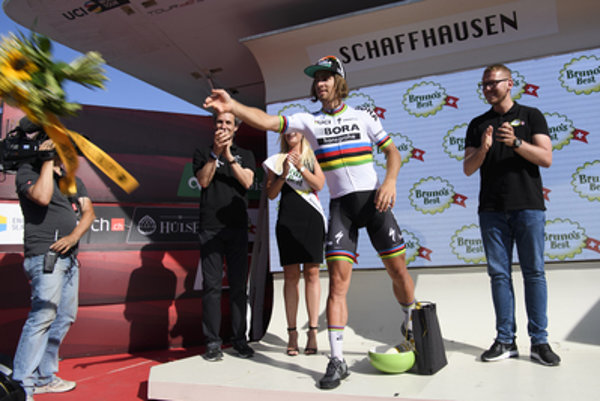 Sagan finally made it to the stage on June 17. (Source: AP/TASR)
Font size:A-|A+

In both stages, he started began sprinting long before the finishing line. With wins in the fifth stage last week and the eighth stage on June 17, Sagan won the points competition, the Sme.sk website wrote.

The current world champion posted a video on social media in which he thanked the organisers for their assistance in helping him reach the podium. At the moment when he was supposed to accept the jersey, Sagan found himself behind a metal fence. Organisers brought two ladders to help Sagan climb over it.

“I thank organisers of the Tour de Suisse for helping me get to the stage in the “unconventional way” – #TímováPráca,” Sagan wrote.

The next race for Peter Sagan is the Slovak championship on June 25 in Žiar nad Hronom. His brother, Juraj Sagan, defends the champion title. Both will then leave for Düsseldorf, Germany, where the the individual time trial for the legendary Tour de France begins on July 1.