They earn thousands of euros – and are important even to politicians. Why are Youtubers so attractive?

Youtubers are among the most influential people of the younger generation. Apart from funny videos, they also point to social issues. 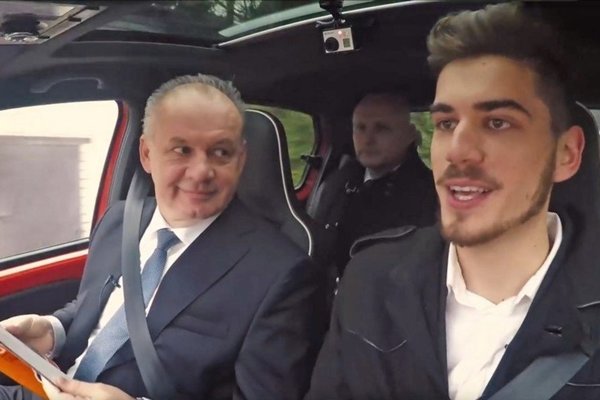 “He wanted to have an elephant in his video – but the advertising agency disagreed, and their cooperation ended.” …. “He ordered PR stories about himself which he paid for.” …. This was the beginning of their campaign. Then two of the most-followed Slovak Youtubers, Expl0ited and Selassie, began a dispute that was watched on Youtube and Instagram by half a million people.

The dénouement surprised many. The dispute was actually a campaign by the Globsec Policy Institute NGO, and the Seesame PR agency in the fight against hoaxes. In their videos, the Youtubers tried to point out how easily young people tend to believe lies without checking on the information.

The message got through to so many people thanks to the popularity of Youtubers who are role models for millions of young people.

They are both around 20 years old and several years ago, they started in the usual way by recording how they played computer games.

Today in short videos, they try to cook using one hand, taste American sweets and spread Nutella over their faces with a paint roller.

Either on Instagram or their Youtube channels, they are often watched by more people than the most popular TV shows.

“It works like some kind of reality show – but for the young, the posts of a popular Youtuber are more authentic than for example the TV reality show where people were closed off in one house,” Teo First of the Seesame agency says.

In his opinion, people enjoy the chance to peep into the privacy of another person – in this case a popular Youtuber. First points out that most young people now prefer the internet to the TV.

The authenticity of the videos stems from their being shot in the Youtuber's own rooms, according to Maroš Hamorský of the Zaragaza advertising agency. “It has none of the artificiality of TV studios – and they touch on issues from everyday life that are interesting for young people,” he explains, adding that these are mainly fashion, meals, games and entertainment.

Their success lies also in publishing their videos regularly and touching on the same themes. After several years, they manage to virtually “train” their own audiences,” Hamorský believes.

Thousands of euros a month

The year 2010 can be considered the official start of Youtubers in Slovakia, Hamorský says. “The most popular Youtuber here, Gogo, who now has more than 1.5 million subscribers, started in that year,” he explains. The most famous global Youtubers like KSI or PewDiePie started making videos about one year before that.

In Slovakia, many of them had no idea at first that they could make a nice living from this. The main source of income is the number of videos seen. The higher this number, the bigger the share of the advertisements and some percentage of this goes to the video-makers. This can amount to several thousand euros a month.

Expl0ited, born Peter Altof, who is the second most popular Youtuber in Slovakia, made a video in which he reveals how much he earns in a month on Youtube videos. For the 3.7 million views from last December, he earned more than 2,000 euros. The Youtuber pointed out that December is the best month for making money, as during the Christmas season, companies increase their advertising the most.

Popular Youtubers ale also recruited by various firms to advertise their products – be it clothes, sweets, or a famous drink. Also, participation in various events can bring them money.

Thus, the most successful among them consider making videos their daily job.

They are well aware and conscious and also important to politicians

Slovak Youtubers are aware of their impact on young people, and try to use it to promote good things.

Selassie, born Matej Slažanský, who is the third most-watched Youtuber, for example made a video at a Roma settlement in which he tried to bust the prejudices against this minority.

The girlfriend of Expl0ited, also a Youtuber – Moma Horňáková – last September published a video in which she tells about her troubles with anorexia, and warns young girls how the effort to lose weight can turn into a mental disorder.

After advertising agencies, companies and NGOs, politicians have also noticed the popularity and reach of Youtubers. At the end of last year, President Andrej Kiska made a video with Gogo – who drove him to the Presidential Palace.

One of the recent candidates for public TV and Radio, RTVS, advertising executive Michal Ruttkay, has designed an online channel for Youtubers. He pointed out that the older generation of TV and radio audiences are dying off.