CSR reports should not hide failures

What standards should a good CSR report uphold? 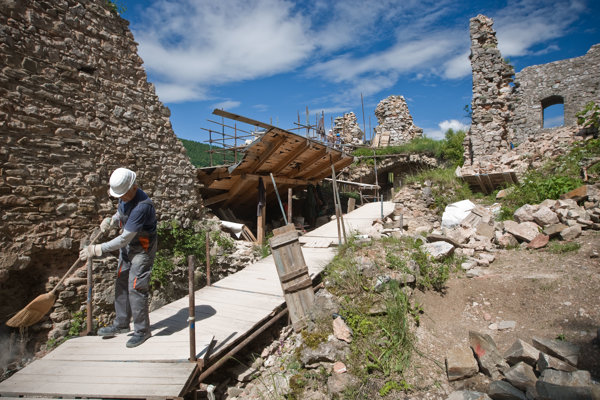 Several big companies in Slovakia create their own foundations to contribute money to restore cultural monuments or support community projects. Moreover, an increasing number of corporate volunteers come together every year to help make their city a nicer place. This, however, is only one side of the coin. Aside from the tangible results of their work, socially responsible companies also need to focus on reporting about their activities as it is an important indicator of their transparency.

“All leading companies today do not ask why they should report about their CSR activities; they ask how,” Elaine Cohen, head and founder of CSR consulting and sustainability reporting firm Beyond Business, told The Slovak Spectator.

Sustainability reporting is an important means by which companies communicate with their stakeholders and partners. It is important to know how much financial capital the company uses, but also to understand how it uses non-financial resources such as water, energy, labour and others, says Davion Ford, a media relations manager of the Global Reporting Initiative (GRI) organisation which creates standards for CSR reports.

“Reporting is a way that companies can demonstrate a commitment to protecting the environment and creating positive social impacts, while thriving economically,” Ford told The Slovak Spectator.

One of the chief principles is to report truthfully, without any efforts to hide potential failures, the experts agree.

“The reports force the companies to take a hard look in the mirror,” Simona Gembická, PR manager of the non-governmental Pontis Foundation, told The Slovak Spectator.

Similarly to annual reports, CSR reporting also shows how the company fares in certain areas and what it should improve, she added.

Apart from partners, important recipients of CSR reports include investors, employees, customers and the local community, which is affected by the company’s activities.

“But it is important to use different ways to communicate the activities to different groups of recipients,” Gembická said.

The nature of a CSR report is that it must satisfy all audiences to some extent. Targeted communications to different groups can be developed thereafter using information from the full report, Cohen adds.

“Many people are mistaken in thinking that consumers read CSR reports,” Cohen explained. “They do not. CSR reports are written for a professional audience – including industry watchdogs and NGOs that distil relevant messages out to consumers.”

Most companies use the standards that GRI started defining nearly 20 years ago in their reporting. At the time, only a handful of businesses disclosed information on their use of non-financial capital; yet that number has grown to include thousands of businesses in more than 90 countries, Ford said.

The style of writing used in the reports has also changed. In the beginning, many businesses used it as a PR exercise, hoping to enhance their reputations by showcasing some “good work” they were doing. Gradually, they began to reap the real benefits of reporting.

“This does include reputational benefits but reporting also helps these businesses adjust their strategies to gain competitive advantage,” Ford said.

Companies that use the GRI reporting framework also say that reporting has helped them save money on things like energy costs and waste disposal. Moreover, it is easier to secure sources of capital as more and more investors look to couple financial returns with positive social impacts, Ford added.

Reports should be specific

This is one reason why the most important GRI principle is materiality. This means that companies should only report on topics that are truly relevant for their most important stakeholders.

“Of course it is nice to hear that a textile company has reduced their use of paper in their offices but most likely this is not the most significant impact the company has,” Ford explained. “It’s more likely that the company’s stakeholders will want to know how much water the business is using and how the company plans to reduce this over time.”

Another important principle is boundary, which means that the company’s stakeholders need to understand where exactly these material impacts occur.

“We need to know what the most important impacts are and where they occur,” Ford said.

Cohen adds two more principles she has developed. The first is authenticity, which means that she is looking for targets and progress toward stated targets.

“A company that does not develop CSR targets is probably not serious about CSR,” Cohen says.

The report also needs to include examples of practice and input from external stakeholders, which helps reinforce its credibility. It is also important to report bad results as without them, its authenticity is often destroyed, she adds.

The second aspect concerns the specific impacts. Every company should identify the impacts rather than merely present a shopping list of activities.

“This is by far the most difficult thing for companies to address and very few do it well,” Cohen said.

More CSR reports on the way

The European Parliament adopted in April 2015 a directive regarding the disclosure of non-financial and diversity information by certain large undertakings and groups.

Under the new rules, large public-interest entities (like companies, banks and insurance firms) with more than 500 employees should disclose in their management report relevant and useful information on their policies, main risks and outcomes relating to at least environmental matters, social and employee aspects, respect for human rights, anti-corruption and bribery issues, and diversity in their board of directors.

Slovakia implemented the directive via the amendment to the law on accountancy which became effective on January 1, 2017. The respective companies will now have to disclose information about their activities in the field social and environment protection already in the following year’s annual reports, according to Gembická.

“Several companies already prepare the CSR reports on voluntary basis,” Gembická said, adding that thanks to new legislation the number of reports may increase significantly.