Strike at Volkswagen could prompt others

The recent strike at the biggest carmaker in Slovakia may serve as a lesson for some, trade unionists in other companies agree. 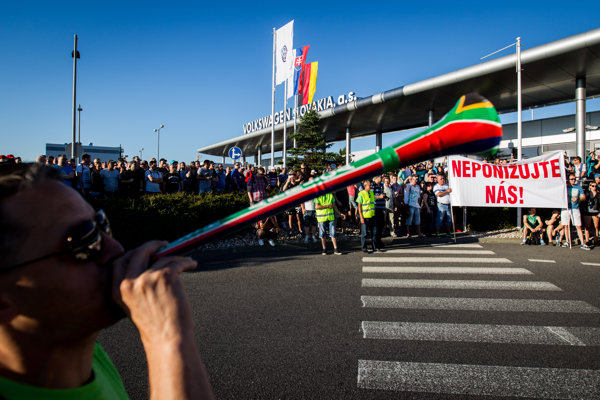 An increase in salaries by 14.12 percent in the next two months years , a one-off bonus as part of the July payslip, and two extra days off are a few of the main achievements of the six-day strike at Bratislava-based carmaker Volkswagen Slovakia.

“For the first time there was such an extensive strike in a multinational company,” Vladimír Baláž, forecaster at the Slovak Academy of Sciences, told The Slovak Spectator.

Its outcome may now motivate other multinational companies to fight for their demands, the analyst opines.

The new deal suggests that the salaries will increase in three phases, with employees receiving the higher payslip already next month. In the first phase, salaries will grow by 4.7 percent as of June 1, 2017. Moreover, the employees will receive a one-off bonus of €500 in July.

The increase will cost the carmaker some €46.9 million, with additional millions of euros being paid on higher payroll levies, the Sme daily reported. The one-off bonus will require €6.2 million more.

In addition to the salary increase, the sick-leave reimbursement will amount to 40 percent of the average salary, and employees will have one extra day off (for a total of 21) in 2018 and another one in 2019, which will eventually make it 22 days off a year, Sme wrote. 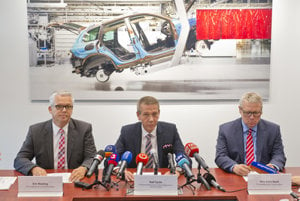 Though the trade unions failed to garner all of their demands, for example, the original requirement to hike salaries by 16 percent, they consider the strike a success.

The management, however, considers it senseless.

“With this solution we in fact returned to our original proposal from April, i.e. from the time before the strike,” VW SK’s personnel director Eric Reuting told the press on June 26, as quoted by Sme. At the time, the carmaker proposed a total increase in salaries by 13 12 percent.

Yet Smolinský denies the claim, saying that the salary hike is higher than originally offered.

“It is an absolutely great increase,” he said, as quoted by the Denník N daily, adding that not only the basic tariffs will increase, but also the salaries paid out during holidays or Christmas will rise.

The strike was also supported by politicians. Though some critics pointed to the fact that the salaries at the carmaker are high enough, Prime Minister Robert Fico said the demands are legitimate.

“The salaries in this company are quite high when compared with the Slovak average,” Fico said, as quoted by the TASR newswire, adding that they are still lower than workers in the same positions in western Europe.

The strike is an internal affair of the company and the trade unions, he admitted, adding that he respects the right to strike.

Impact on production will be low

The carmaker’s management does not comment on the impacts on economic results and production. The production of luxurious SUV cars was completely stopped in the Bratislava plant, while the production of smaller family vehicles was limited to a low number of vehicles per day, Sme wrote.

Baláž, however, does not expect the impact to be too extensive, neither on VW SK’s production, nor on the country’s GDP growth as the strike was too short. Moreover, part of such agreements is often a promise to catch up with the drop in production.

The fact is that not all employees took part in the strike, he added.

Earlier this year, the other two carmakers in Slovakia, Žilina-based Kia Motors and Trnava-based PSA, were also negotiating higher salaries. Yet despite some threats, no actual strikes took place at either company.

Both of them consider the strike at VW SK a great lesson for the future, admiring the will of the protesters.

“You never know in advance whether the employees will stay united, whether the strike will be calm, and how long the company’s management will let the production lines stopped,” Miroslav Chládek from trade unions organisation at Kia Motors Slovakia told Denník N.

The strike at VW SK may now motivate the employees of other multinational companies to negotiate for better pay and working conditions as “the strike teaches trade unions to negotiate,” Baláž said.

“The only way for employers to prevent strikes will be to agree with trade unions in advance,” Baláž said, adding that some companies are already doing it due to the current problem with the lack of qualified labour force in the market.