The last premiere of the season and the restored Opera Studio piece, The Abduction from the Seraglio by W.A. Mozart, has been staged by young singers and a director who tapped into this genre for the first time. 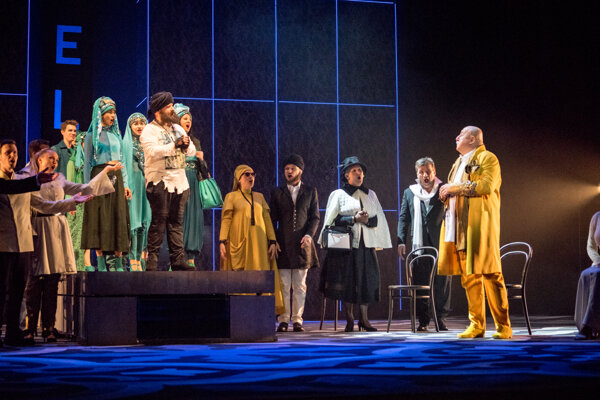 This piece of Mozart is the continuation of the project interrupted by the Slovak presidency of the Council of EU – which occupied the Reduta building and partly also the historical building of the Slovak National Theatre in Bratislava where the Opera Studio took place. This project strives to discover young talent and to offer opportunity for students and fresh graduates to apply their knowledge in practical experience, while also involving beginning musicians and theatre-makers,

Mozart’s Singspiel and its peculiarities

The Abduction from the Seraglio is, rather than a classical opera, the German genre of Singspiel, a light-footed, playful piece with funny, naïve, soap-opera plot, entertaining characters,and a lot of prose interspersed with songs. This work was ordered by the German National Theatre in Vienna, and although he had already composed several Italian-style works, he accepted and – as always – gave his best to the challenge.

Mozart mastered the specifics of the genre, while also managing the features perceived as negatives: lack of ensembles, or lacking space for characterisation of roles. The Austrian composer also used as much as possible the positives Singspiel had – like greater freedom in instrumentation, which Mozart approached in an absolutely innovative way for his time, or the pioneering use of harmonic structures.

For conductor Peter Valentovič, this is his first operatic work (apart from operetta The Land of Smiles). He stressed the innovative and unique musical features of the Abduction: there are three percussive instruments, which is not repeated in any other opera, as well as three flutes, with a new use of the flute. Mozart was fascinated by the exotic sounds of janizary music– the military music of the Ottoman period – and he worked in janizary music into the score where the plot takes place in Turkey. Valentovič also stressed how demanding the singers’s parts are, especially those of Constance and Belmonte, but also the deep parts of Osmin. The division of voices is not typical for Mozart, not to mention the missing ensembles and more arias, and the spoken role, Pasha Selim, distinguishes this work from other operas by Mozart, the conductor noted. His alternation will be young Slovak, Maroš Potokár. 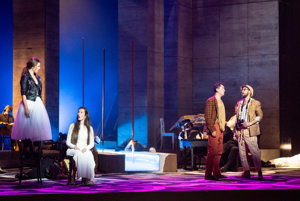 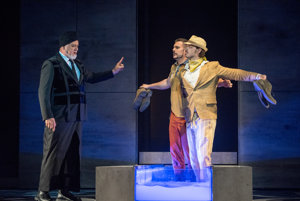 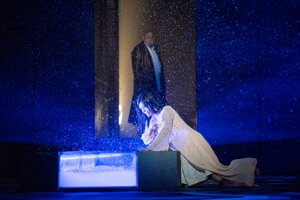 The role of Pasha Selim enabled popular Slovak actor, Andy Hryc, to not just make it to the SNG stage but to appear in an operatic piece. However, this task was challenging for him, too – although “he will not give a single false note”, as the director promised, as he only speaks in it – because he speaks no German. The language of the Abduction is German, though, and Hryc had to learn an impressive amount of words, phrases and sentences. He admitted that he learned them phonetically, thanks to his son-in-law who lives in Germany and who recorded them for Hryc.

The stage design was made by Martin Černý and costumes by Ľudmila Várossová.

Director and his perception

The director of this staging is Ján Ďurovčík, rather well-known for choreographing and directing dance and musical pieces. He explained, however, that he has been dreaming of directing an opera since ever, or at least since, he was assistant of renowned Slovak director, Jozef Bednárik. After a failed chance in Prague, Ďurovčík addressed the SND and expressed his desire. A mere two days after his phone call, the arrangement started to take shape, and after a lot of auditioning and long preparations (caused also by the above-mentioned Slovak presidency), the piece has had two premieres, on June 16 and 17. It will have a re-run on June 29 and then during the whole 2017/2018 season.

The Abduction from the Seraglio is an intriguing combination of light entertainment in the plot and dramatic part, while the music is very demanding, requiring much effort on the part of performers. It is re-run on June 29 and then throughout the 2017/2018 theatre season.

“My effort is to make an emotional theatre, for which this piece is very suitable,” Ďurovčík said, adding that he also appreciated the fact that the piece plays in Turkey, a country he loves and knows well. The director added that although the Bratislava staging takes place in a modern-time Turkish resort, all other aspects remain: the characters actions, motivations and behaviour remain true to Mozart.

“The other thing I want to stress and repeat is that in directing such a piece requires humility, awe and respect towards Mozart’s work – his music, and the libretto – as I deem him not only a genius composer, but also a genius dramatist,” Ďurovčík noted, adding that all shifts or changes have been made to fit the work to be functional and realistic in the current world.