Fire-figthers are controlling the fire in Záhorie region

Since Wednesday afternoon, a forest fire has been localised but not extinguished, despite the aid of a police helicopter. 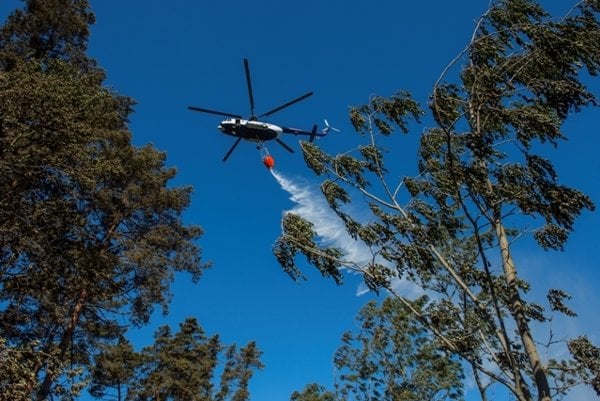 A fire in the forest between the villages of Jakubov and Láb in the western-Slovak region of Záhorie was localised on the morning of June 28 . However, the situation was made more difficult by the strong winds, the operations officer of the Regional Presidium of Fire and Rescue Corps in Bratislava told the Sme daily.

Approximately 70 vehicles and devices and 150 members of the corps were on-site, the operations headquarters informed.

The damaged area covers about 30 hectares, the mayor of Láb, Marián Moravčík, said according to the daily.

Professional fire-fighters from Malacky, Pezinok and Bratislava, as well as volunteer fire-fighters from the nearby municipalities of Lozorno, Veľké Leváre, Malé Leváre, Gajary, Plavecký Štvrtok, Zohor and many other towns have helped to curb the fire, said Zuzana Farkasová of the Presidium of Fire and Rescue Corps.

The Interior Ministry also sent a helicopter to help extinguish the flames.

On June 29, professionals from 30 fire stations in Bratislava, Trnava, Nitra and Trenčín regions and volunteers from Trnava Region offered their assistance, the TASR newswire wrote.