To hell for playing cards

The goal of the Crusades in the Middle Ages was to regain holy sites for the Christians. It is known, however, that the Crusaders did not achieve great success in Asia, and though the campaigns were carried out in the name of higher ideals, they mostly degraded into low looting. 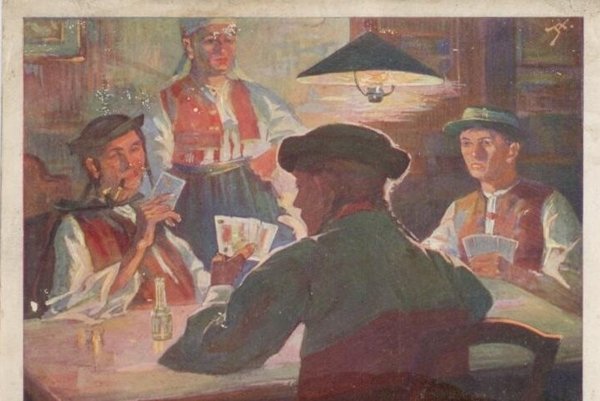 Playing cars was perceived a sin but enjoyed, nevertheless. (Source: Courtesy of B. Chovan)
Font size:A-|A+3

Those who survived these adventures, brought home, apart from various diseases and injuries, also one form of entertainment and passion – playing cards.

Subsequently, this game quickly spread around the whole of Europe and as early as the Middle Ages, people played cards also on Slovak territory. Never mind that especially the church at first threatened card playing with harsh punishments: damnation was the sentence to punish gamesters. However, neither the prospect of being damned nor the high fines could stop the popularity of cards. Soon, cards became the most popular game in Europe.

Cards were played at home, at school, by soldiers in trenches. Thrilling rounds were played even during the ancient tradition of wakes for the deceased.

In Slovakia, the German marriage cards and the French rummy cards became especially popular. Both of them reflected the alchemistic ideas of the world: for example, the 52 rummy cards represented the 52 weeks in a year. Individual colours represented various symbols, too: green spades symbolised cosmic tree, red hearts the centre of life, diamonds the female principle or knowledge, and clubs the male principle.

The men who played cards in a pub in the village of Detva some time in the beginning of the 20 the century were, in all probability, not worried about any symbolism. They wanted to be amused and not to lose too much money – or maybe even start a brawl. Playing cards used to be accompanied by drinking. As we can see, these players in the painting by Jaroslav Augusta also drank, as the typical glass goblet on the table reveals.