The four painted rooms in the Drugeth manor-house in Humenné were all ordered by nobleman István XIV. Csáky. The one dedicated to Maria Theresa – whose 300th anniversary is celebrated this year – probably dates back to 1773. 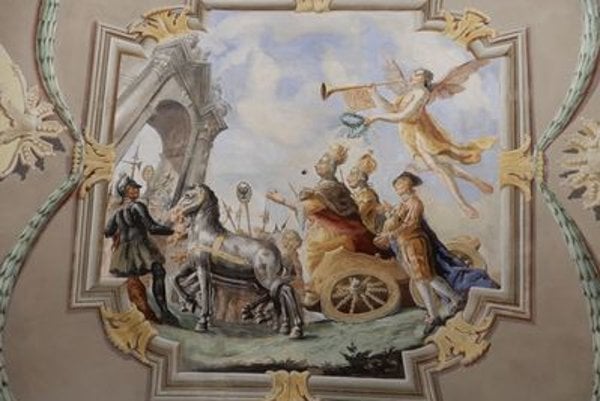 This dating is confirmed by some historical events depicted in the murals, the TASR newswire wrote, citing the historian of the Vihorlat Museum in Humenné, Zuzana Koščová. This room is a connecting one, with an octagonal shape and it represents a communication link between the rooms of the ground floor of the manor-house’s west wing.

The walls are all covered with painted illusive ornamentation and figural compositions. In the corners of the rooms, there are hidden niches with built-in wardrobes. Their single-winged doors are coated with canvas and the surface is decorated with an illusive frame for a portrait.

“Above the door, there are lengthwise panels with figural motifs of the coronation and festive entourages of Emperor Joseph II, Pope Clement IV., Emperors Francis of Lorraine and Maria Theresa,” the historian told TASR.

On the ceiling, Maria Theresa is portrayed with her son, Joseph II. “This is the triumphant arrival to the town,” Koščová noted.

The concept of preserved illusive decoration of the rooms of Humenné manor-house complies with the period’s fashionable trends, especially the traditional family loyalty to the Hungarian law and the imperial majesty, she said, as quoted by the newswire.

One of the most important rulers of the Habsburg dynasty, Maria Theresa, was born on May 13, 1717 in Vienna. Thanks to the pragmatic sanction of her father Charles VI who died without a male heir, she became the Roman-German Empress, the Austrian Arch-Duchess and the Hungarian and Czech queen. Her rule even came to be known in political, economic and cultural history as the Theresian era. She died on November 29, 1780.