Smer has once again proved that (mis)using history is its forte. 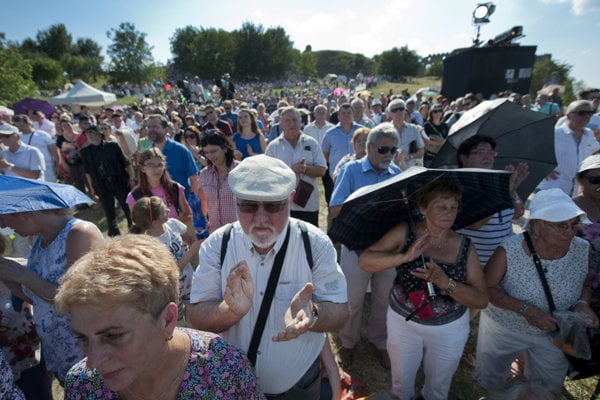 The Interior Ministry made sure that buses brought attendees from all around the country. (Source: TASR)
Font size:A-|A+0

The Hello! that Prime Minister Robert Fico shouted from Devín Castle on July 5, when Slovakia marked a national holiday devoted to Ss Cyril and Methodius, was surely heard across the border in Austria, where scores of Slovaks were running around the towns and villages of Lower Austria, shopping for the bread and milk they’d forgotten to buy the day before.

There were many who preferred cross-border shopping on this national holiday – the first in a long time (apart from Christmas) when shop owners were required by law to stay closed for the whole day – as could be seen from the traffic jams at border crossings with Austria and Poland. On the other hand, there are still people who prefer more spiritual ways to celebrate national holidays – including the prime minister, who spent part of the day at Devín Castle, a totem of Slovak mythology. He was careful to point to the fact that he was the only one of the three top constitutional officials to hail Cyril and Methodius.

“Hello! I’m yelling and I am calling on the top constitutional officials of this country, that this is the most significant state holiday that Slovakia has and that we must value and honour it,” Fico said to the crowd gathered at Devín.

Fico ignored the fact that President Kiska was justifiably absent as his wife was about to give birth to their son, and politely(?) omitted to mention that the third senior constitutional official – his coalition partner, Speaker of Parliament Andrej Danko – was “not welcome” to address the crowd, something which threatened to cause yet another mini-crisis in the coalition.

The prime minister also failed to enlighten us regarding which criteria he had applied to determine that Ss Cyril and Methodius Day is our most important national holiday. Cyril and Methodius played a major role in the early history of what is now the Slovak nation. The two missionaries brought not only Christianity but also the basis of the first language and scripture to our ancestors, which no doubt deserves respect and commemoration. But does the prime minister really believe they are more important than, say, the heroes of the Slovak National Uprising (another of his favourite holidays)?

In the heat of early July, as the news cycle slowed down, Smer once again proved that when it comes to political marketing – if one leaves aside the flowers and postcards that it showers on women on March 8 – making use of history that is distant, poorly understood and thus easy to twist, is its forte. The statue of Svätopluk in front of Bratislava Castle, also their doing, is proof enough of this. Fico was the main speaker at the Devín event, Marek Maďarič’s Culture Ministry prepared the programme for the event, and Robert Kaliňák’s Interior Ministry made sure that buses brought attendees from all around the country.

“It was a national holiday and I will celebrate [holidays] as appropriate,” Fico told a press conference when the opposition criticised him and his ministers for spending tens of thousands of taxpayers’ euros on the performance.

Fortunately for the dignity of Cyril and Methodius, these petty verbal exchanges among politicians, filtered by the news media, are of secondary concern to the ordinary folk who woke up on July 5 only to realise they had no fresh bread at home. The closest that most Slovaks got to the cloud of hot air around Devín Castle that day was as they crossed the nearby Austrian border to fill their shopping trolleys.