Sightseeing at a faster pace

A guided running tour is an alternative to traditional sightseeing by bus or on foot in Bratislava. 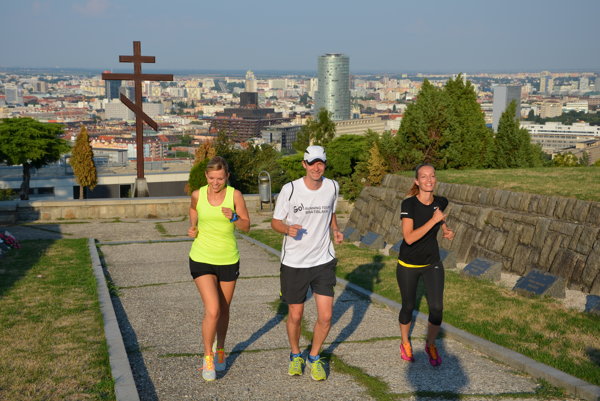 Some like to sight-see cities from buses, while others prefer tourist train cars or Segway rides. And some even like to run when sightseeing. This alternative way of getting to know a foreign city has also reached Bratislava. One of the ‘running’ guides in Bratislava is Michal Ajpek, who is able to connect two of his hobbies – running and guiding. The Slovak Spectator spoke with Ajpek about how the tours began, who his clients are and what plans he has for the future of the tours.

The Slovak Spectator (TSS): What are running tours?

Michal Ajpek (MA): It is classic sightseeing in Bratislava, but on the run.

TSS: How did you get the idea to offer this kind of tour?

MA: I always liked the idea of guiding tourists. While working full-time, I took a course for guiding in Bratislava. Afterwards I was thinking about what I wanted to do next, since I only wanted to do guiding as a part-time job. Large bus tours did not appeal to me and, moreover, the traditional market of tour guides in Bratislava is already saturated, as there are several hundred registered guides. I was looking for something special. I like running, so when I came across Go! Running Tours, it was an obvious choice. This organisation hosts running tours in cities, especially in Europe. I contacted them and bought a franchise for Bratislava and its vicinity. It’s a bit different from traditional guiding, since I can guide and exercise at the same time.

TSS: How does it work?

MA: Those interested contact me through the booking system on the parent organisation’s website. They can choose from several different routes. Then I have 24 hours to confirm the order.

TSS: Which routes can they choose?

MA: The shortest one is six kilometres, and the longest is 18. The most popular route is Up and Down via the Old Town. Depending on the length chosen, we stop at the Bratislava Castle and Slavín, the war memorial and military cemetery. Another route, the Danube River Run, goes along both embankments of the Danube River via the bridges and the Old Town. A longer route is a 15-kilometre run from Devín to Schloss Hof in Austria via the cycling bridge over the Morava River in Devínska Nová Ves. We run through Devínska Kobyla and through Sandberg, so it’s a bit of a hilly route. During the From City to Nature route we run up to the Kamzík hill and through the recreation area Železná Studienka. That one is more about nature than sights. 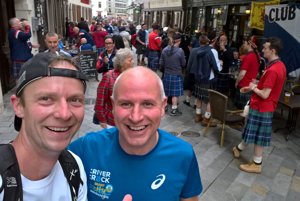 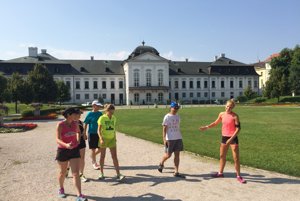 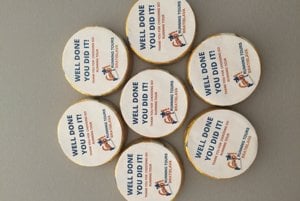 TSS: What do people base their choice on?

MA: My experience is that they choose based on the length rather than on what they will see. But it really depends.

TSS: What is the running pace during the tours?

MA: It is up to the client. It is also up to him or her as to whether it is more about the run or about the sight-seeing. But the majority of those who choose this kind of tour want to know more about the places where we are running, so we always stop at places like the Castle or Slavín. These also offer nice views of the city, and runners can take a short break. At Slavín they are usually grateful for the rest because the hill there is quite steep. Visitors from flat areas likes Buenos Aires or Washington always say they do not have a place to train uphill at home. But I also had two runners in their sixties, and one of them had had a heart attack in the past. But he was in such good shape that the younger ones couldn’t keep up with him.

TSS: And what about you – have you ever had a problem keeping up with a client?

MA: I had a female runner who had done a marathon in under three hours. The day we ran in Bratislava, it was very warm – up to 35 degrees. She was in top shape, and I had not slept for two nights, since I had been in France to a see a football match. So that time she had to adjust her pace a bit to me, but usually it is okay.

TSS: What types of people choose your city tours?

MA: They are mostly foreign managers or business travellers who are here in Bratislava on work. Sometimes they ask for a tour at completely crazy times to fit it around everything else they have planned. So far, the most extreme was a client who I ran with at 5 o’clock in the morning so that she could catch her flight home at eight.

People here on holiday also opt for running tours. I once had three Americans who managed to visit three cities in one day. They arrived in Bratislava from Vienna in the morning, took the running tour, and continued by train to Budapest in the evening. Another client came from Vienna just to have the running tour. Immediately afterward, she hurried back to Vienna to go to an opera performance that night.

TSS: What nationalities are your clients?

MA: I have already had clients from all continents except Africa. But so far, they have always been foreigners. None were Slovak.

TSS: What interests them in Bratislava?

MA: It is very varied – as we say in Slovakia, ’100 people, 100 tastes’. When the clients are from the northern parts, we stop at each tree because they want to know which trees are growing here. When I guided Swedes from behind the Arctic Circle, it was enough for them that the sun was shining. They were here during the winter, when they have a polar night at home. When people arrive from Dubai, they are just rejoicing that the weather is only 30 degrees Celsius.

I also guided a couple made up of a Russian woman and a Swiss man, and we actually stopped at everything on the route. The Russian liked the historic buildings like the Castle and the Presidential Palace, and the Swiss wanted to stop at every construction from the previous communist regime, whether it was Slavín or the reversed pyramid of the Slovak Radio, since they don’t have anything like that in Switzerland. He liked Námestie Slobody, Square of Freedom, very much. Normally, I just take a short break there and say that it is the largest fountain in the city, and then we continue. But he spent five or even 10 minutes there.

TSS: How many running tours have you given so far?

MA: I bought the franchise at the end of 2015, so my first season began in 2016. I had about 30 runs during it. This season, there have only been four to five runs so far. The season lasts May to September, but the main season is July and August. Because the runs take place in the morning, even the summer heat is not a problem.

TSS: How much does a running tour cost?

MA: It depends on the length of the route and the number of participants. With a single client it can cost as little as €20 or up to €45 for the longest 18-km route. As the number of clients increase, the cost per person decreases, of course.

TSS: What are your plans for future tours?

MA: I have a lot of ideas about what to do. For example, I would like to extend the routes offered to include Svätý Jur or the borders with Austria and Hungary. There is a so-called triangle point, a point where the borders of three states – Slovakia, Hungary and Austria – meet. This could be combined with the village of Rusovce, which is now part of Bratislava and where a Roman military camp Gerulata used to stay, or the water dam on the Danube and the bunkers.