The works of the renowned Master Paul are not limited just to Levoča. 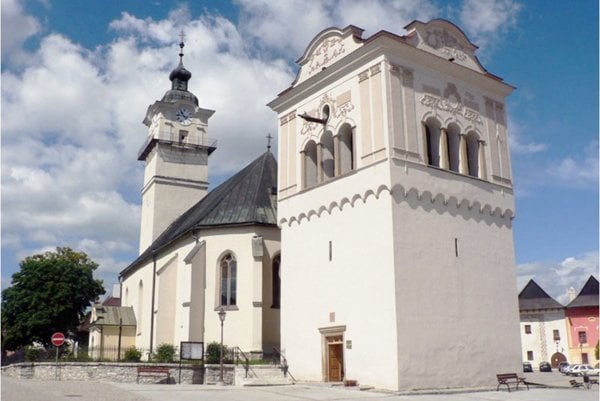 His own statues and sculptural groups, and those stemming from his workshop, can also be found in tiny churches in inconspicuous villages. Most of them are in the historical region of Spiš but some of the works of Master Paul (Pavol in Slovak) and his apprentices decorate places of worship in the adjacent Šariš and Gemer regions. 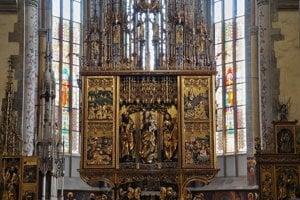 The picturesque centre of this borough of the town of Poprad, which used to be a separate village in its own right, is dominated by the St George Church. The adornment of this church is the eponymous main altar made around 1513 by Master Paul. The altar had already made an impact by the beginning of the Renaissance and it includes The Last Supper, a tall relief with the motif of St George fighting a dragon and the Lord our Father on a throne with the kneeling Christ and Maria. Master Paul also included himself among the Apostles – as he was wont to do – but we can only guess which one of them depicts him. Another gem from his workshop is the statue of St Anthony the Hermit. After long disputes, recent research has confirmed this altar statue bears the signs of Master Paul’s workshop. 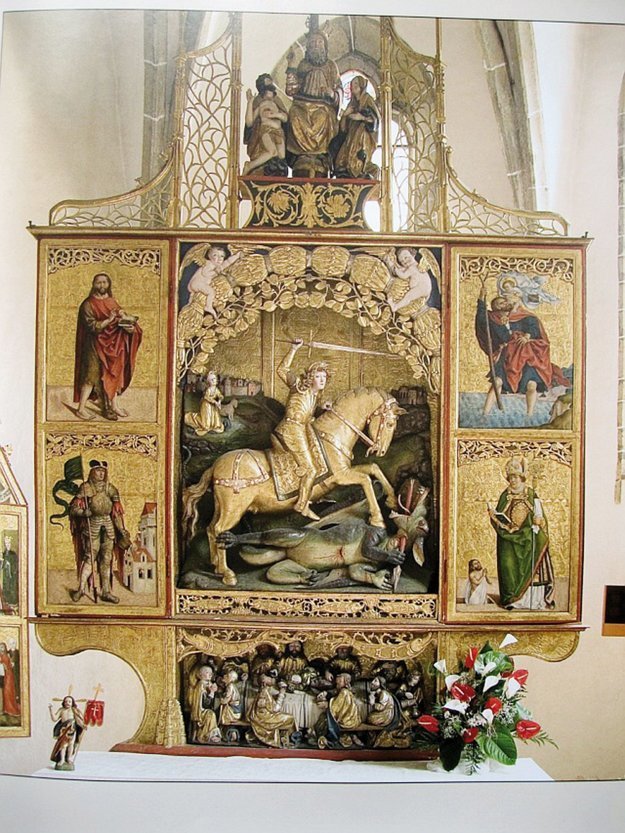 The Holy Cross Basilica houses a cross with a statue of Jesus which dates back to the early 16th century. It is placed in the altar case of the main altar but it is evidently too big for it; it seems to have been placed on a different altar originally. This could be one of the first works of Master Paul, according to recent research. The Kežmarok Basilica Minor is one of the biggest churches in Spiš, and it contains five more, late-gothic altars, a bronze gothic baptismal font, a Renaissance senator's pew, a rococo confessional and many other precious historical items. 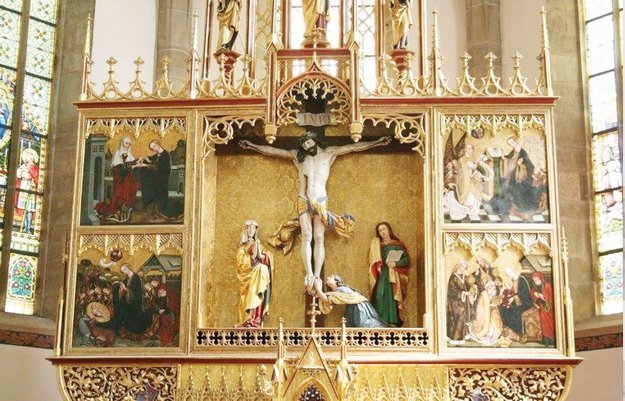 In the local Assumption of the Virgin Mary Church, there is a baroque altar from 1709; but in its middle, a gothic altar case from the original altar by Master Paul can be found, dating back to approximately 1511. His tender depiction of the Madonna is one of the most beautiful in Slovakia. The cross placed just next to the altar, from the 16th century, also bears the “handwriting” of Master Paul. 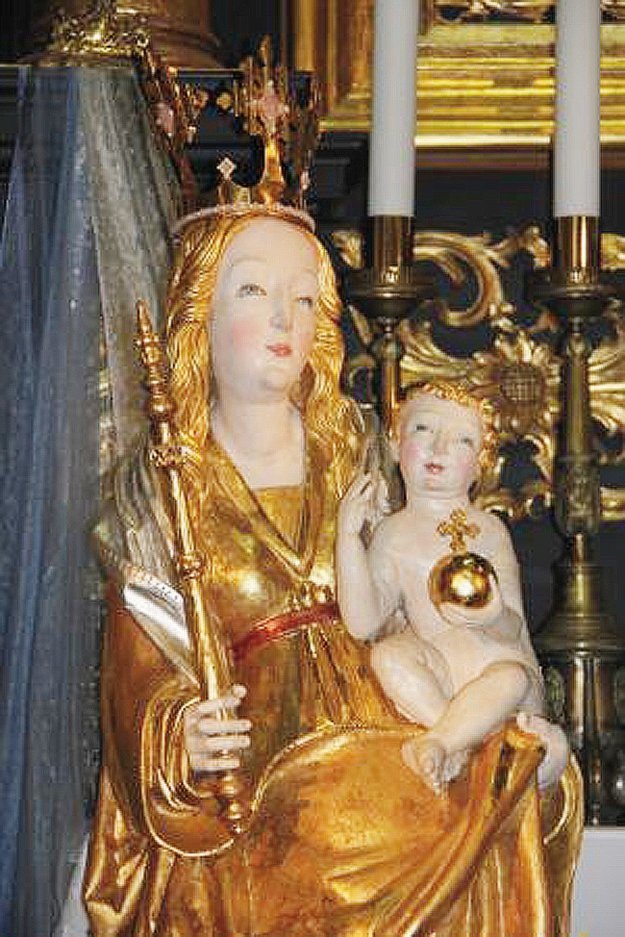 The historical rarity of Mlynica village at the foot of the Tatras is an originally romanesque church built probably in the mid-13th century. Later, it was rebuilt in the gothic style and received two new altars, which seem to come from the years 1515 to 1520 and to be made by Master Paul of Levoča or his disciples. The most prominent statue is that of St Margaret the Virgin of Antioch, patron saint of the church which is definitely the work of one of the sculptors collaborating with Paul.

The gothic church of St Lawrence in Hrabušice is dominated by a late-gothic winged altarpiece dedicated to the patron-saint of the church, which dates back to 1516-1520. The statues of The Virgin Mary, Sts Lawrence and Stephen the Protomartyr were made in the workshop of Master Paul of Levoča and were placed in the altar case. In the inner wings, there are four panels with scenes from the life of St Lawrence the Diaconus and on the outer sides there is a depiction of the Passion cycle. 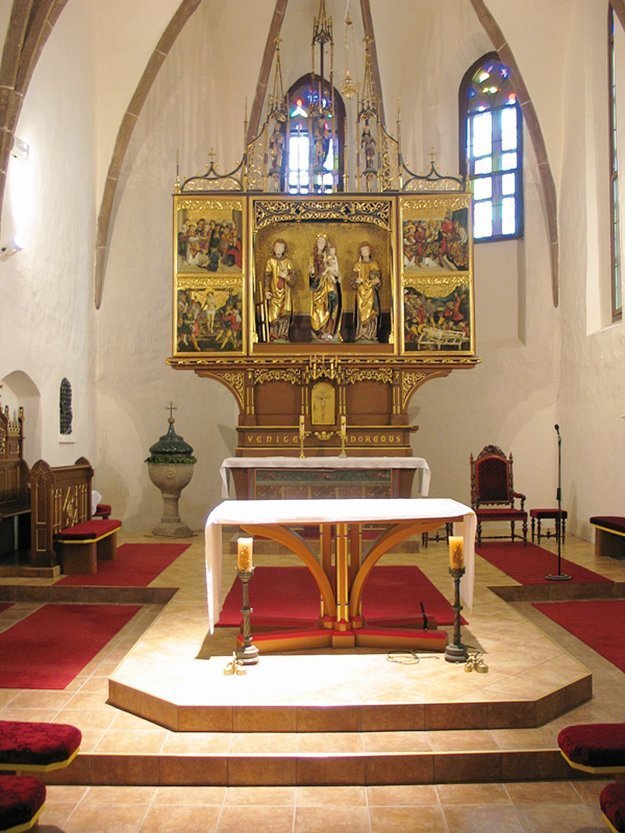 The Church of the Assumption of the Virgin Mary in Spišská Nová Ves is notable not just for its tower – the tallest in Slovakia – but also for its sculpting group, Calvary, from 1520, which belongs among the greatest gems of Master Paul. Originally, it was placed on the beam of the triumphal arch but now, its place is in the southern wall. However, the three statues are to be reconstructed, and so they will not be available for public viewing in the near future. 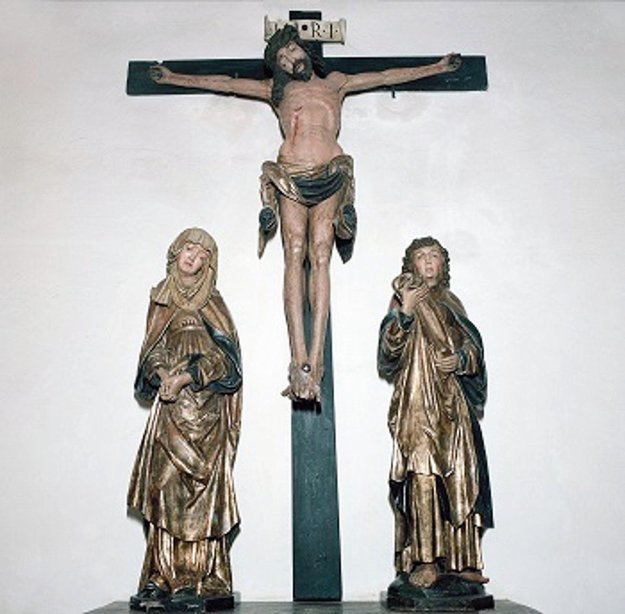 In a village close to the Polish border, believers gather in the Church of the Purification of the Virgin Mary. It was built in the second half of the 14th century, and although the dominant part of the church now contains a newer, baroque altar instead of the original, gothic one, it still houses mediaeval statues of the Virgin Mary and St John, that were originally in the Calvary on the triumphal arch.

The statue of the Madonna is among the most precious items in the church, as it stems from 1510 and was made in the workshop of Master Paul. 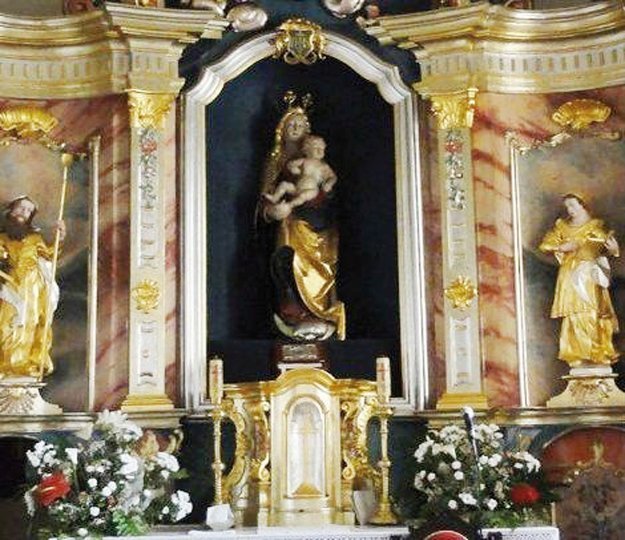 The originally romanesque church of St Catherine of Alexandria has been rebuilt several times in the course of history – but the precious monuments were not destroyed, fortunately. One of them is the statue of Jesus on the cross by Master Paul, which was originally part of the triumphal arch but during floods in the 19th century, the ceiling fell and damaged the interior. Ultimately, the cross was set into the baroque altar. 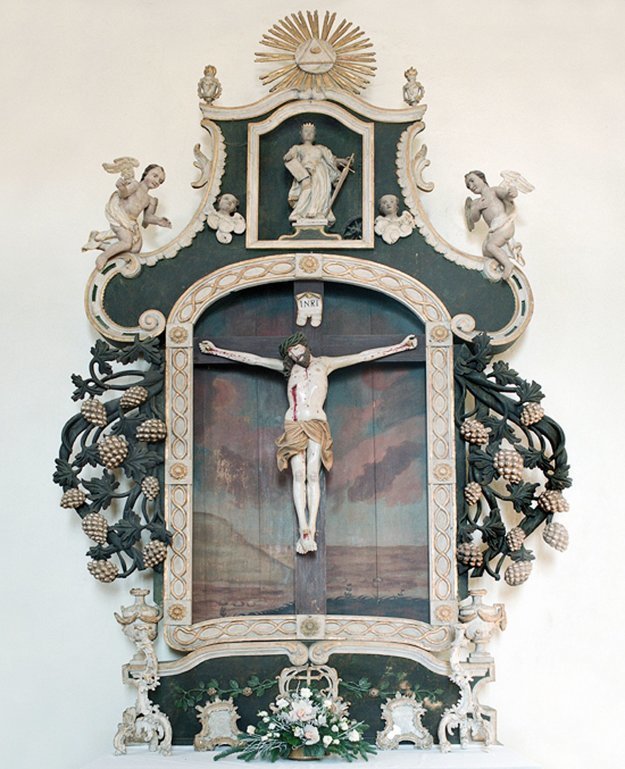 The Šariš Museum in the town of Bardejov holds the group of statues known as The Small Calvary which shows at first sight who is its author. The typical signs of Master Paul can be seen in the type of scene, stylisation of figures – and in each detail.

The Calvary from Bardejov is considered the last work of Master Paul and it has represented our cultural heritage at many national and international exhibitions. It was last renovated almost half a century ago. 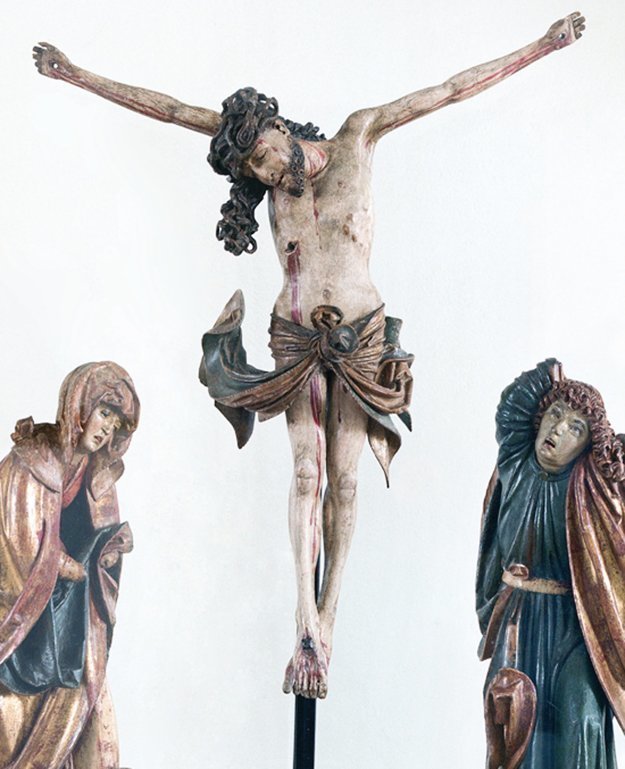 Master Paul also worked for the St Nicolas Church in Prešov where three statues have been preserved from his body of work. One of them is the statue of Michael the Archangel, which used to be the central figure of the altar which had ceased to exist by the end of the 18th century. As the statue was preserved only in a torso state – arms missing – it was mistakenly considered to be that of Gabriel the Archangel.

It is clear from older archive sources, though, that it is Michael the Archangel and that the statue had originally probably had a lifted right arm with a sword and scales in the left hand, on which he weighed the souls of those deceased in mediaeval scenes . 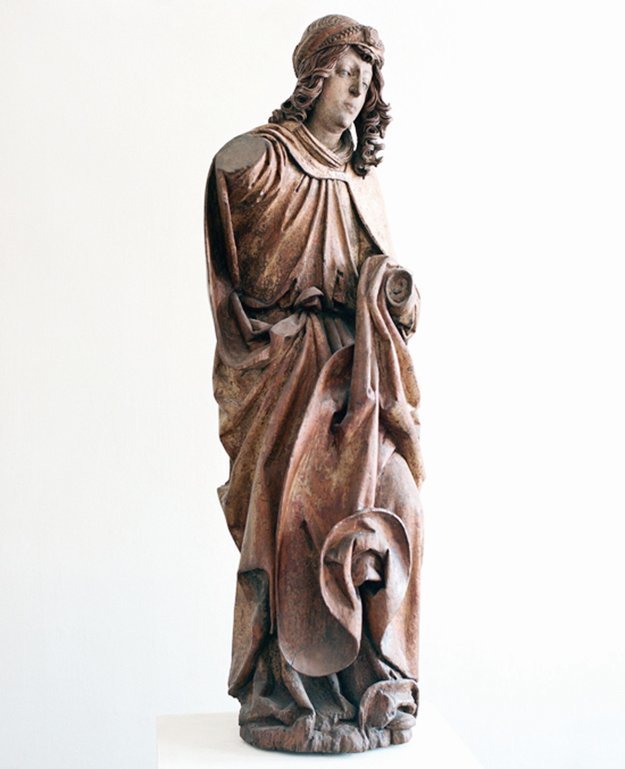 The impressive Calvary of Master Paul in Spišská Nová Ves also used to contain the statue of St Maria Magdalena but it had a tumultuous fate. It disappeared from the Spišská Nová Ves church and found a new home in the village of Stratená (meaning The Lost in Slovak).

In the meantime, it spent a while in the wooden bungalow chapel near the railway station, in a place called Na Špitáli (i.e. At the Hospital). The wooden structure vanished in the 1960s, and thus, the statue was moved to the Stratená church. Apart from minor repairs, it has never been properly renovated. 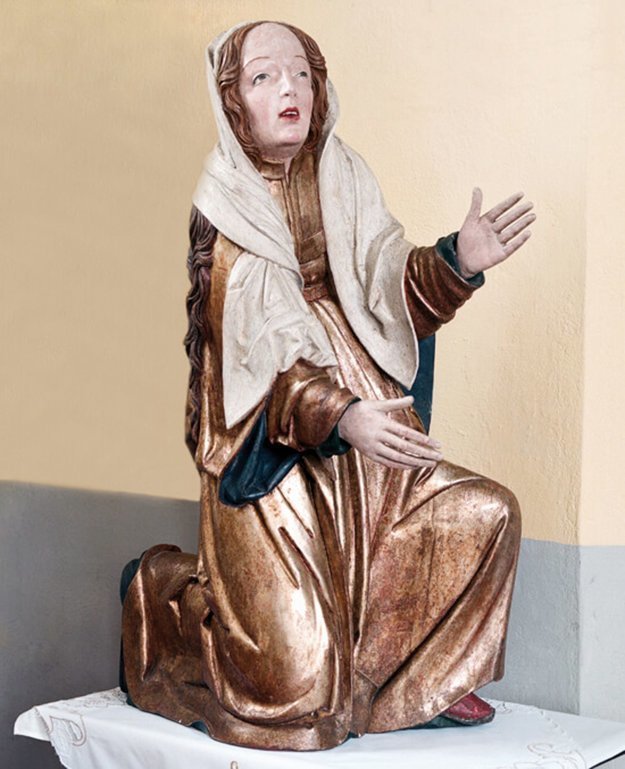 Master Paul and his disciples also decorated the interior of St Martin’s Church in Lipany. This was probably done at the order of the Tárczay family who had a family chapel there. The main altar and other works, like the statue of the crucified Christ, bear unambiguous signs of Master Paul. The Christ on the cross used to be part of a sculptural group, but now it is placed separately in the nave to the left of the main altar. 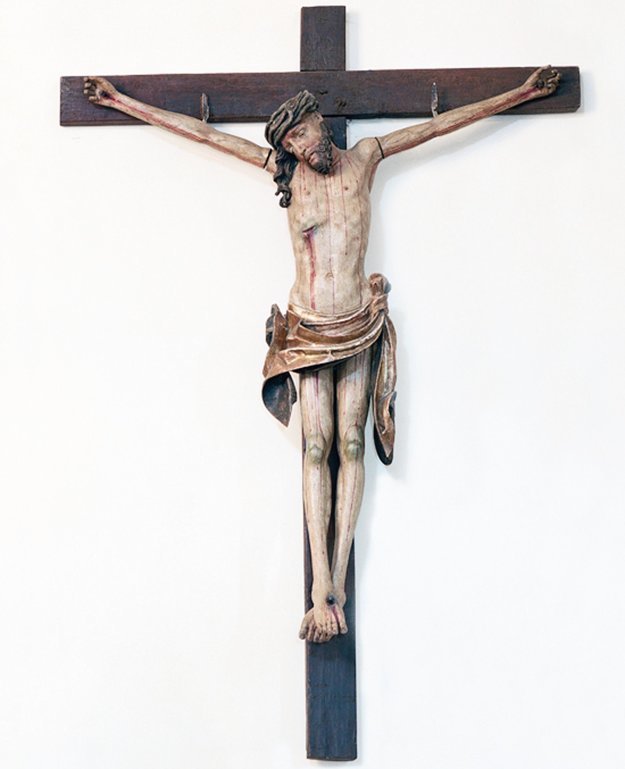