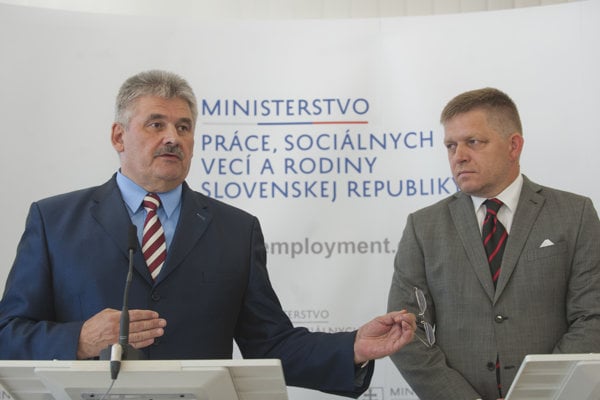 The registered unemployment rate in Slovakia reached 6.90 percent at the end of June this year. Compared to May, the registered jobless rate decreased by 0.45 percentage points. In an annual comparison, the unemployment rate was 2.55 percentage points lower last month, informed the Director General of the Central Office for Labour, Social Affairs and Family, Marián Valentovič, on July 20.

Prime Minister Robert Fico, who attended the press conference as well said, as cited by the SITA newswire, “We finally have a magic six at the beginning,” seeing the activities of the Labour Ministry behind the drop in numbers.

Fico pointed out that Slovakia has never had such a low unemployment rate in its history.

Ľubomír Koršňák, analyst with UniCredit Bank Czech Republic and Slovakia, ascribes the reduction of the jobless rate to the economic revival.

“The unemployment rate has been falling during the recent period especially under the influence of the cyclic economic revival,” Koršňák wrote in his memo.

The current economic growth is demanding in terms of labour force. Contrary to the previous decade it has not been gaining from massive investments into modernisation of the economy that had increased labour productivity and thus had reduced demands for a new labour force, said Koršňák.

“This was confirmed by the June figures when especially the strong absorption of jobseekers by the labour market was of great surprise,” wrote Koršňák.

The prime minister sees the unemployment rate in Slovakia declining also due to activities of the labour department, which uses EU funds to support employment.

“If the state did not enter this arena, I think we would not have achieved such results,” said Fico, adding that his government has met its promise and created 100,000 new jobs.

Fico pointed out that Slovakia did not only have the historically lowest registered unemployment rate last month, but also the overall jobless rate recorded its historical low. Labour and Social Affairs Minister Ján Richter pointed out that in June alone, 17,000 new jobs were created in Slovakia according to the data of the social security provider Sociálna Poisťovňa.

“Never, ever, in the history of Slovakia has the country reached such a low unemployment rate,” said Fico as cited by the TASR newswire.

As for the individual regions, all eight regions in Slovakia recorded a decrease in the unemployment rate in June, with the Banská Bystrica Region seeing the most significant drop.

On the district level, the unemployment rate was down in 73 districts in Slovakia in June, while an increase was recorded in five districts. Labour offices reported 61,995 job vacancies in late June.

“I’m pleased that unemployment in the Poltár district has fallen by as many as 8.41 percentage points over the last two years,” said Fico. “There’s still work to do, however. We have districts, such as Rimavská Sobota, where the unemployment rate exceeds 20 percent.”

He added that the government is preparing measures in this regard. They want to introduce the promised bonuses for night work or work during weekends.

“The minister [Richter] is searching for possibilities to support labour mobility as well,” said Fico. “Moreover, we also expect employers to do something in this regard.”