On skates and in masks around Bratislava’s Petržalka

In-line skaters and cyclists can enjoy roads cleared of cars. 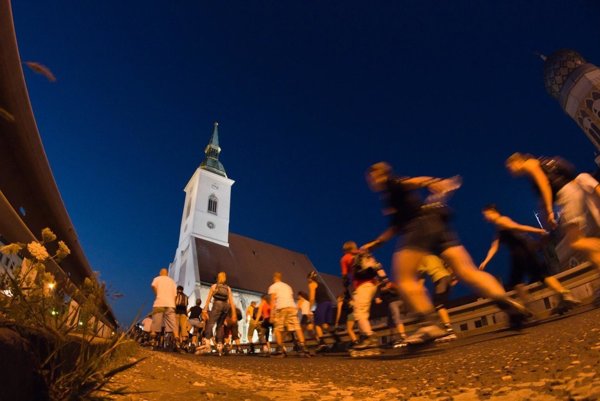 Each Friday during the summer about one thousand inline skaters are taking to the roads in Bratislava that are normally occupied by cars. This Friday, July 21, will be no exception when the Bratislava Inline team has organised another mass inline-skate event for everyone except total beginners but this will be special as the skaters are expected to arrive in masks. This year’s theme is colours, the organisers inform on their website.

The event will start at 20:00 in the rest zone of the Aupark Shopping Centre in Petržalka and the warm-up will last for approximately one hour. Here it is also possible to rent skates. The journey, this time around Petržalka with a stop at Technopol, will last until 23:00.

The route will be cleared of cars and accompanied by police patrols, first aid and music.

Bratislava-inline skating is a summer event that has taken place every summer Friday evening since 2004. While it is free and without any registration, those who attend can win some prizes.

The event is open for cyclists too, although they are asked to follow the skaters in order to prevent collisions.

More information, but only in Slovak, can be found at the website www.bratislava-inline.sk.