Heatwaves to continue in Slovakia over the following days

More than 40 people collapsed due to hot weather on Thursday. 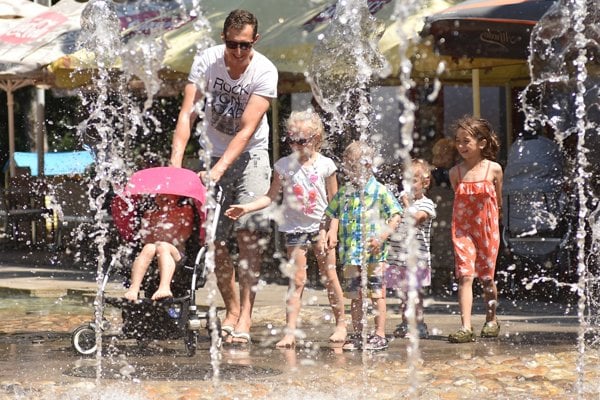 High temperatures ranging up to 33-34 degrees Celsius are forecast to bedevil some parts of central and eastern Slovakia even on Friday, July 21, prompting the Slovak Hydrometeorological Office (SHMÚ) to issue a first-degree heat alert for portions of the Banská Bystrica, Prešov and Košice regions.

“The air temperature in question is not unorthodox for the given season, yet it poses potential danger for human health, physical activities and the creation of fires,” writes SHMÚ on its website. The warning will be in effect between 14:00-18:00.

Some parts of Slovakia will also face heatwaves on Saturday, July 22. The related heat alert in this context applies to the districts of Trnava, Nitra, Banská Bystrica and Košice regions, between 14:00-18:00.

People collapsed from the heat

A total of 41 people collapsed on July 20 due to hot weather. Of them, 28 people had to be transported to hospitals. Most of the cases occurred in the Prešov Region and the fewest in the Bratislava Region.

On July 20, the hot weather did not affect the whole territory of Slovakia, but only some of its regions. In some places the temperature even reached 36 degrees Celsius.