Who will stand up for journalists in Turkish prisons?

Journalists living in countries where politicians (for now) do not send people to prison for their opinions, who only sigh in relief that they are lucky this story does not concern them, are deeply mistaken. 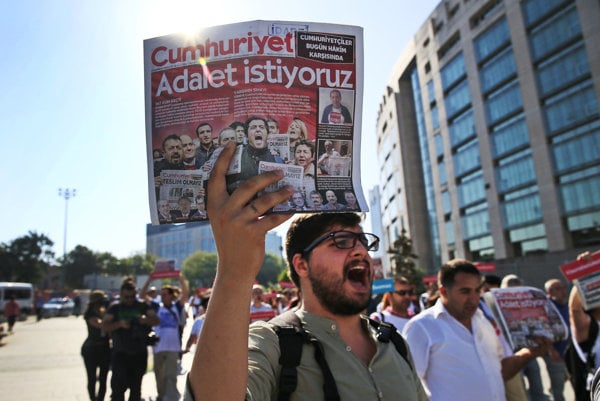 Kadri Gürsel does not have the ambition to be a hero. He is a journalist who only wants to do his job. But he has been sitting in prison for more than a year now, and it is uncertain when he will again put his byline under a newspaper story.

He and 16 other reporters of the Turkish newspaper Cumhuriyet have been imprisoned. For their opinions. Their court process, which is taking place in Istanbul, clearly shows how the journalistic profession can become criminalised in the 21st century, just at the gates of Europe.

The ruling power has accused reporters, commentators, cartoonists and, even the head of the literary supplement, of helping terrorist groups.

Terrorism does not sound like something that governments need to deal with gently, and in the name of “international security”, which in this case means in the interest of the ruler, the government can seal the mouths of journalists for decades. Or even forever.

The Turkish government made journalists the enemies of the nation without proof. This process of ripping out journalists’ tongues has been called the cleansing of public life.

Journalists from Cumhuriyet did not ally with terrorists. They had only been doing their jobs when they warned that the country is dangerously drifting away from the principles of democracy. Prison is the punishment that “shows that I was right when I wrote that Turkey is moving towards autocracy”, Kadri Gürsel said at the court.

The Turkish government, in their efforts to eliminate every person who they label as a participant in the coup, crosses the lines of rationality, Kadri wrote last August for Al-monitor, a website about the Middle East. In September 2016 he wrote about political purges in schools in the south-east, mostly Kurdish, area of Turkey. His last article that the website published before his imprisonment was an analysis about what the Turkish ground troops’ mission against the Islamic State will be.

None of the things he wrote make him an ally of terrorists.

Journalists living in countries where politicians (for now) do not send people to prison for their opinions, who only sigh in relief that they are lucky this story does not concern them, are deeply mistaken. Kadri and the more than 150 other journalists who are currently sitting in Turkish prisons have become victims of autocracy.

And autocrats almost always make the free press their first victim. Their big enemy. And is the road from eliminating free media to imprisoning journalists long enough to keep journalists outside Turkey comfortable? Who will stand up for the imprisoned journalists, if not their colleagues? Do we actually realise how very fragile the freedom of press is?

Beata Balogová is a member of the International Press Institute executive board.