The booth is promoting a free offline Bratislava City app. 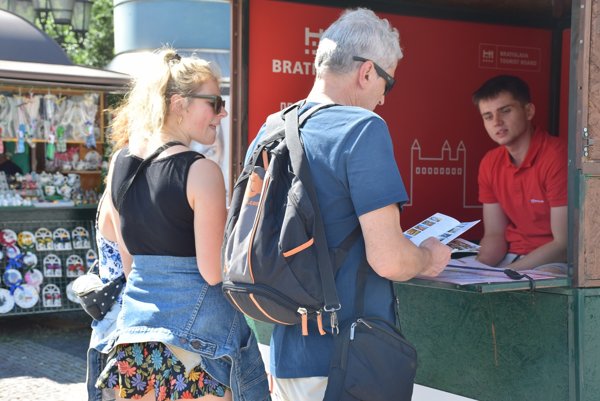 Domestic and foreign tourists will now find it easier to get around the Slovak capital of Bratislava thanks to a newly opened information booth on Hviezdoslavovo Square in the centre of the Old Town, the Bratislava Tourist Board (BTB) reported on July 31.

The new information booth, which will be open daily between 10:00 and 18:30, provides tourists with information about the capital in nine languages. While an employee in the booth is able to communicate with tourists in the Slovak, English and German, leaflets, maps and various brochures will also be available in French, Hungarian, Russian, Italian, Spanish and Chinese.

“We’re responding to demand, as most visitors come from the Czech Republic, Germany, Austria, England, the USA, Italy, Spain and Russia,” said BTB spokesman Maros Plitko. BTB has offered the booth in cooperation with Bratislava’s Old Town borough. “The number of tourists from Hungary, which is our neighbouring country, is rising too. An increasing numbers of tourists are coming from China as well.”

Furthermore, as part of the Smart&Green solutions, the new information booth also features a tablet with internet connection.

“Its task is to show visitors how to download the free offline Bratislava City app,” said Plitko. “Thanks to this, tourists can have all the information, tips for trips and a map with them, without needing an internet connection.”

The app is also available on the website www.visitbratislava.com.

More than 1.2 million people visited Bratislava in 2016, representing a 15-percent hike compared to 2015. In the first quarter of 2017 the city recorded another hike of 5 percent. Partly due to such increases, the capital decided to open a new information centre on Hviezdoslavovo Square, the eighth such centre in Bratislava.

Other information centres are located at entry points into the city, including the airport, rail and bus stations and the passenger port at the Danube River. The main information centre is located on Klobučnícka Street.