A plane had trouble landing in Sliač

Both military and civic firefighters had to intervene. 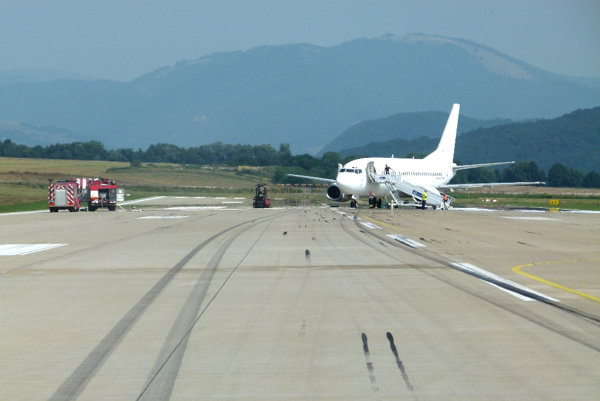 The military firefighting worked with civil firefighters to help during the landing of a Boeing 737 plane at the Sliač airport on August 2. The plane had problems with its undercarriage, the TASR newswire reported.

“It was a plane of an Egyptian company that flew from Hurghada to Sliač,” said Danka Capáková, spokesperson for the Defence Ministry, which operates the Sliač airport, as quoted by TASR.

None of the 113 passengers was injured.

“After the landing, the plane remained on the runway,” the chair of the board of directors of the Sliač airport Roland Schaller told the Sme daily.

The plane was could not be moved from the runway and blocked the main area of the airport. As a result, other flights had to be suspended, Schaller said. Special tools had to be transported from Bratislava to pull the plane away, Sme wrote.

Schaller could not say whether the trouble was caused by a technical malfunction or a human factor. He notified the aviation authority, which has already sent an investigator to Sliač, Sme wrote.

The airport in Sliač is also used for Slovak fighter planes MiG-29 that protect the country’s airspace. The Defence Ministry could not say whether they were able to take off at the time the runway was blocked, explaining that the law does not allow it to do so.

The airspace was “secured in the sense of standard NATO operational procedures”, Capáková told Sme.