The ceremony was organised by Brussels Mayor Yvan Mayeur, who thanked Slovakia for the “beautiful tree”. 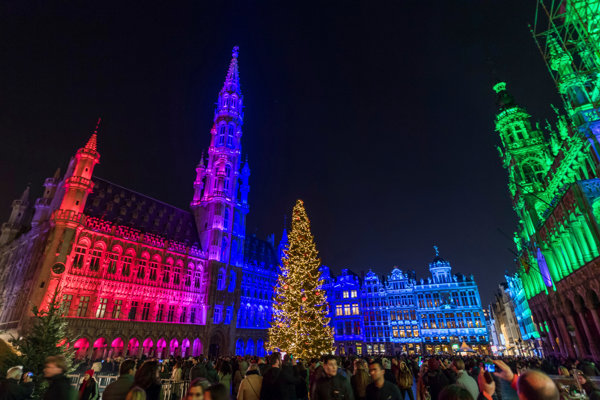 A Slovak Christmas tree decorated Grand Place, the main square in Brussels, during last year’s Christmas period.
The ceremonial lighting of the tree, brought there from Horné Orešany (Trnava Region) as a gift of Slovakia’s presidency of the Council of the EU, took place in late November, starting the traditional Christmas celebrations in Brussels, the TASR newswire reported.

The ceremony was organised by Brussels Mayor Yvan Mayeur, who thanked Slovakia for the “beautiful tree”. Also Slovak Ambassador to Belgium Stanislav Vallo, who had the idea to place a Slovak tree on the main square, participated in preparations for the event.

Both were assisted by ambassadors from Japan and Canada, whose embassies had stalls at the zone booked for the Pleasures of Winter festival.

Part of the programme was included a performance of the folklore ensemble Makovica from Svidník (Prešov Region) that also sang Silent Night in Slovak.

The tree’s decoration and lighting became part of the show titled Lost in Brussels. The music part was secured by Belgian DJ Lost frequencies, while the lighting was provided by designer Koert Vermeulen, TASR wrote.