You can tell a lot about a world leader based on how they spend their free time. 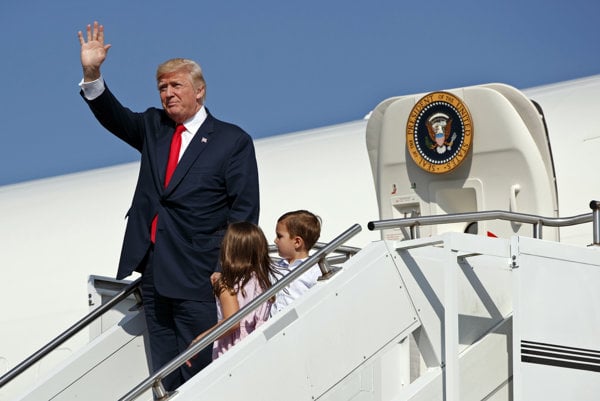 Trump waves as he walks down the steps of Air Force One with his grandchildren after arriving at Morristown Municipal Airport to begin his summer vacation at his Bedminster golf club in Morristown, N.J. (Source: AP/TASR)
Font size:A-|A+

You can tell a lot about a world leader based on how they spend their free time. The fact that Vladimir Putin is a judo black belt and likes to ride horses shirtless makes a lot of sense. While it is shocking at first, when you hear that Saddam Hussein once authored a romance novel you realise it is exactly the sort of crazy thing you would expect to hear about Saddam Hussein. Same goes for former North Korean dictator Kim Jong-Il, who was Hennessy cognac’s single biggest customer, spending about $1 million per year on the drink. That seems about right to me.

This same pattern goes with how world leaders spend their holidays, and as August is holiday season and many top politicians are set to take a few days off where they are going and what they are doing tells us a lot about them.

Not only has Angela Merkel gone hiking in the same part of Italy for the past five years, but she was photographed earlier this week wearing the same red checkered shirt, and khaki pants she has worn in all those previous trips (Consistency). Meanwhile, French President Emmanuel Macron was not on vacation himself this week, but he did visit a community centre holding summer programmes for kids who cannot afford to go on holiday this summer (PR savvy). UK Prime Minister Theresa May is at the beginning of about three weeks vacation — in Europe, not the UK (Hypocrite).

History supports this thesis too. You might recall Silvio Berlusconi, the former Italian prime minister, used to spend a lot of his vacation time at his Sardinian villa. Back in 2009, he hosted the 18th birthday of an Italian underwear model there (A buffoonish playboy). That same year, former Czech prime minister Mirek Topolanek was regrettably (for all of us) photographed sunbathing naked during a visit (A man with bad taste in friends).

In the United States, Donald Trump began a 17 day vacation on August 4, and looks set to spend most of it at one of his own golf clubs in New Jersey. In typical Trump fashion his decision to take a vacation is exactly the opposite of what he said he would do when president — meaning his holiday also says a lot about him (Liar).

I am hoping that a Trump vacation might mean we can all take a break from worrying before he begins causing global chaos again in September — but I wouldn’t bet on it. In the meantime, maybe the North Koreans could spare us some cognac?