The temperatures on August 9 and 10 again be very high. 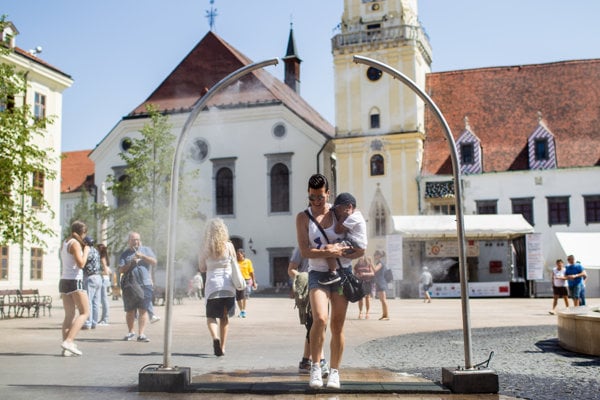 After a cooler start of the week, prepare for hot weather again. The Slovak Hydrometeorological Institute (SHMÚ) issued several warnings for August 9 and 10.

The temperatures on August 9 are expected to be as high as 33 degrees Celsius in the southern parts of the country. SHMÚ thus issued a yellow (first-level) warning for the whole Bratislava Region and districts of Trnava, Nitra, Banská Bystrica and Košice Regions for the afternoon hours.

The warnings for August 10 were issued for nearly the whole of Slovakia, except for parts of the Žilina Region. SHMÚ even issued its highest, red warning for the districts of Dunajská Streda, Komárno, Nové Zámky, Galanta, Šaľa, Nitra and Hlohovec on August 10, where temperatures may be as high as 38 degrees Celsius in the afternoon. The temperature in Bratislava Region, the rest of Trnava Region and most of Trenčín, Nitra, Banská Bystrica and Košice Regions may climb to 37 degrees Celsius, which is why SHMÚ issued an orange (second-level) warning for these areas. The yellow warning was issued for several districts in Trenčín, Žilina, Banská Bystrica and Prešov Regions.

The warnings were issued also for August 11, with orange warnings for the whole southern Slovakia and yellow for most of the remaining area. The only districts without any warnings are in Kysuce and Orava regions.

“The high temperature poses a potential risk to people’s health, physical activities and fires,” SHMÚ informed, as quoted by the TASR newswire.

Women are more endangered as they collapse more often than men. Also at risk are children and seniors. It is necessary to drink enough water, which is about three litres in the case of adults, TASR wrote.