Towns and cities battle the heat

Regional capitals finance measures to fight climate changes from their own budgets. 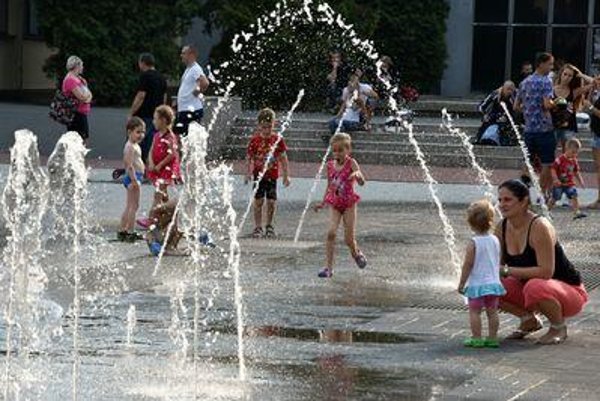 Extremely hot weather caused a total of 240 premature deaths in the first half of August 2015. So far, it had been the deadliest hot period in Slovakia since 1996, according to the latest study to which climatologists from the Slovak Hydrometeorological Institute (SHMÚ) contributed.

Predictions for forthcoming years are not better as meteorologists say the heat will be more extreme, last longer and be more frequent.

“The occurrence of heat with a serious impact on the mortality of people will also increase in the future,” the climatologists wrote.

Moreover, the Agriculture Ministry is offering money from EU funds to implement measures aimed at decreasing the temperature in towns and the adjacent areas.

Though in the early 1960s extreme summer heat waves were rather rare and impacted only 1 percent of the land, they are now more regular and affect a larger area. Meteorologists expect that by 2020, extreme heat waves will strike about 10 percent of the land area, and by 2040 up to 20 percent, SHMÚ stated on its website.

As for towns and cities, the higher temperatures create worse living conditions as people suffer from worse breathing and sleep. A town’s temperature is impacted mostly by its location, number of inhabitants and surroundings (i.e. whether there are trees or water areas), according to Pavel Šťastný, climatologist of SMHÚ.

One way to solve these problems is by planting trees, but the map of green vegetation in Slovakia’s regional capitals, published in 2015, showed that the situation is not very good. The greenest city at the time was Banská Bystrica, where vegetation occupied more than 50 percent of its cadastral area. The least amount of vegetation was in Trnava, where it represented only 2 percent of the total area.

Cooling down the streets

The city of Bratislava, for example, has implemented several projects to increase the share of vegetation by planting new trees and revitalising several squares. It also constructed a park in the Old Town and a green roof at a house for seniors in Kramáre, as well as reconstructed two ponds at Železná Studienka, at the forest park, said Veronika Šafáriková from the city’s press department.

Trnava is also applying measures to make its streets greener by planting trees and climbing plants.

“We hope this will have a long-term effect and will decrease the amplitude of extremes in the city in the long term,” Tomáš Guniš, head of Trnava’s department of territorial development and concepts, told The Slovak Spectator.

As for the immediate measures applied when the SHMÚ issues heat warnings, many cities are installing water tanks and drinking fountains on the streets. They are also humidifying the air by watering the streets and installing water vapour sprayers. People can also cool down near the city fountains.

There are also some special measures. In Bratislava, for example, some swimming pools extended their opening hours and decreased the entrance fees for the afternoon hours, while in Banská Bystrica people can skate at the local winter stadium.

Decreasing the temperature in towns and cities is demanding, says Šťastný.

“It would require big interventions into their structure, from the point of using appropriate construction materials, and also greening them by increasing the number and size of grass areas, parks, trees, and also artificial water areas,” he added.

This is the reason why Slovak municipalities have adopted only partial measures, focusing on the most vulnerable groups.

The regional capitals addressed by The Slovak Spectator admit that they finance the measures mostly from their own budgets.

This may change for some as the Agriculture Ministry in March announced a call for projects to help decrease the temperature in municipalities, allocating altogether €33 million within the Integrated Regional Operational Programme.

A total of 70 projects worth €21.2 million were submitted in the first round that ended in late June.

“The most questions we received pertained to cooling and refreshing elements in the urbanised environment, i.e. water vapour sprayers in towns and cities,” Marek Mitošinka of the ministry said.